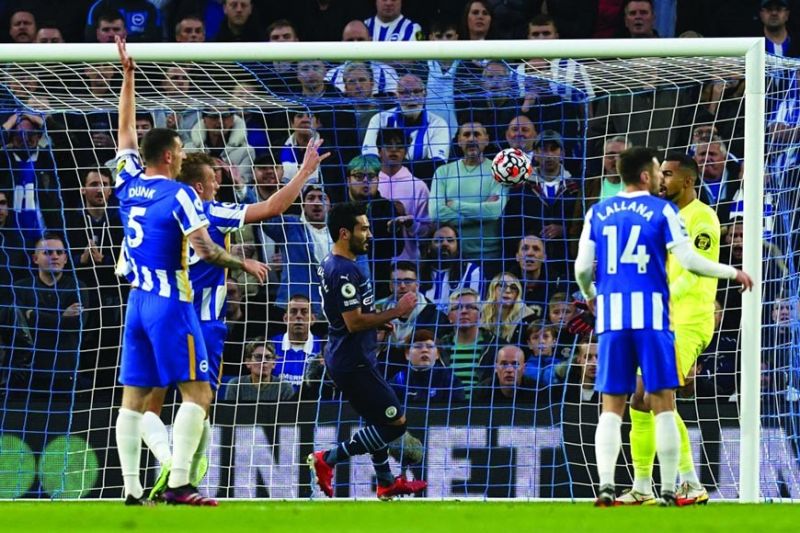 CELEBRATION. Manchester City’s Ilkay Gundogan (center) scores the first goal of the game during their English Premier League football match against Brighton and Hove at the AMEX Stadium in Brighton, London. (AP photo)

BRIGHTON, England — Phil Foden led a masterful first half from Manchester City in a 4-1 win at Brighton in the Premier League on Sunday (PH time).

The defending champions were untouchable before halftime as Phil Foden scored in the 28th and 31st minutes after the recalled Ilkay Gundogan had opened the scoring at Amex Stadium.

Brighton was much better after the break and grabbed a consolation through a penalty converted by Alexis Mac Allister. Riyad Mahrez had the final say, though, coming off the bench to take a pass from Foden and score in the fifth minute of stoppage time for City.

Raheem Sterling scored a hat trick at Brighton two seasons ago but, with his City future unclear, he was not involved as Pep Guardiola pointed to a lack of fitness.

City’s players warmed up in shirts which carried the message “We’re with you Guido” — in support of Belgium-based supporter Guido De Pauw, who was attacked on his way home from the 5-1 win over Club Brugge in the Champions League on Tuesday.

The traveling fans also unfurled a banner with the same slogan of support as the teams emerged ahead of kickoff.

Joao Cancelo, sent off after 10 minutes in this fixture last season, forced a fine low save out of Robert Sanchez, having collected a pass from Jack Grealish, who made a lively start.

Gabriel Jesus came within inches of opening the scoring moments later but his effort was acrobatically cleared away from under his own crossbar by Brighton skipper Lewis Dunk.

City opened the scoring from their next attack as Sanchez spilled the ball under pressure from Jesus and Bernardo Silva hooked the ball to Gundogan, who finished into an empty net.

A short VAR check for a foul on Sanchez saw the goal stand and was just reward for a dominant start.

The lead was doubled before the half hour, Bernardo starting a swift counterattack and feeding Grealish, whose pass across the face of the area was turned home by England teammate Foden.

It was 3-0 shortly afterward as Grealish’s shot was blocked into the path of Jesus, whose own strike deflected unwittingly off the heel of Foden and past Sanchez. (AP)