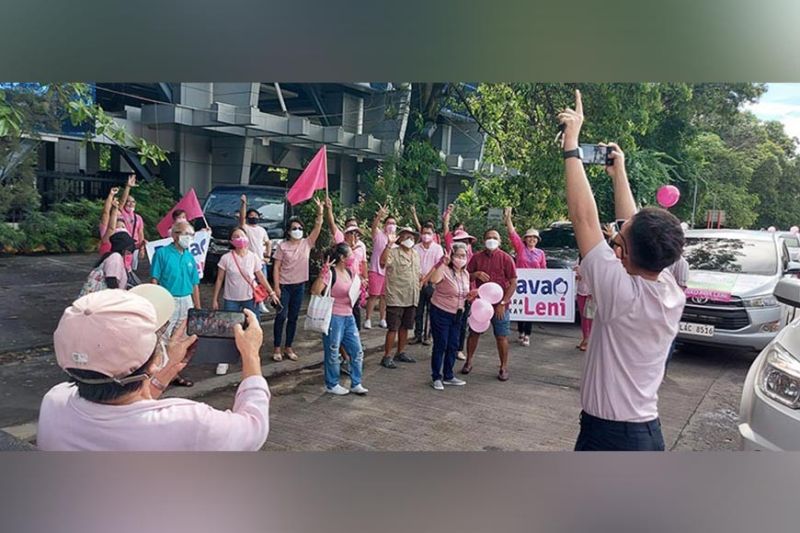 Photo credit to MindanaWon for Leni

DAVAO-BASED supporters of Vice President and presidential aspirant Leni Robredo joined the nationwide "car mob" (caravan mobilization) in support of her candidacy on Saturday, October 23, 2021, despite getting a "thumbs down" from some Dabawenyos.

Different parallel groups, mostly wearing pink shirts and pink face masks briefly converged at the Freedom Park on Roxas Avenue and roamed around the city to express their support to Robredo and her running mate, Senator Francis "Kiko" Pangilinan.

Pablo Reyes, one of the organizers of “Mindanaoans for Leni,” said the caravan, which was composed of 52 cars and 12 motorcycles, was "in solidarity" with the opposition candidate and not just mere "campaigning."

Reyes said the “car mob” was only agreed upon just two days ago among fellow Robredo supporters.

He said nine parallel groups joined in the caravan, which ended at a mall parking lot, while some groups broke and went to Sta. Cruz and Digos in Davao del Sur.

Reyes said they organized the caravan “as a way of testing the waters,” considering the city is the hometown of President Rodrigo Duterte. Hence, they already anticipated the negative feedback.

(Of course, we already expected it considering this is Davao City, the battleground area. This is the hometown of Inday Sara, Bong Go, and PRRD. We already expected the public’s reaction. But we were surprised because there were only nominal people, there were only a few who rolled down their vehicle’s car doing the thumbs down sign. Some also shouted they still go for PRRD.)

He also said some of those who witnessed their car mob “were surprised upon learning that there are non-Duterte supporters in the city.”

(Some even were not shouting PRRD nor Sara’s name but that of Isko.)

Moreno is another aspiring presidentiable, running under the Aksyon Demokratiko party.

Overall, he said there were no untoward incidents, and they were facilitated by the City Transport and Traffic Management Office (CTTMO).

He said they plan to organize more “pocket caravan” in preparation for the 2022 elections.

Meanwhile, Reyes said they believed in Robredo’s capacity in running the country as their future president.

(Why we are supporting Leni? Because she has a sensible mind, a good heart, has faith in God who we know will lead us well and who will serve us with honesty.)

Robredo is the chair of the opposition Liberal Party, but she is running as an independent candidate. Pangilinan, meanwhile, is the party’s president.

The nationwide caravan for Leni also coincided with Duterte-Carpio’s visit to Cebu, where she met with another presidential aspirant, Ferdinand “Bongbong” Marcos Jr.

Duterte-Carpio’s meeting speculated the possible candidacy of the Presidential daughter for the presidency, which she vehemently denied.