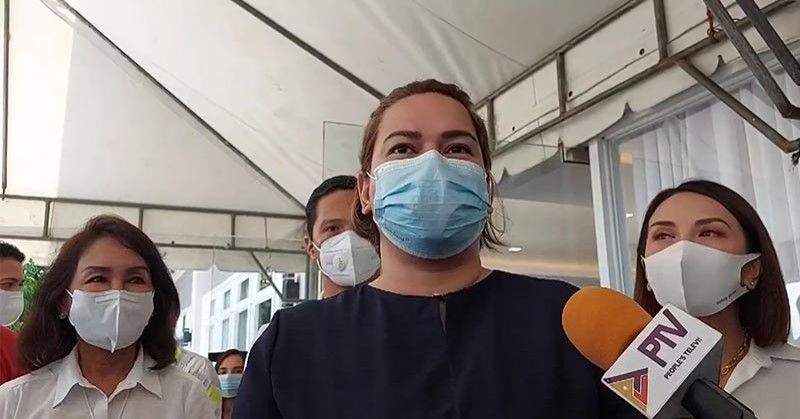 DAVAO City Mayor Sara Duterte-Caprio firmly reiterated that she is not running for the presidency and that her party, Hugpong ng Pagbabago (HNP), will back the presidential candidacy of former senator Ferdinand "Bongbong" Marcos Jr.

Duterte-Carpio, who led the inauguration of the newly constructed Liloan Sea Port in Cebu on Sunday afternoon, October 24, 2021, made the confirmation in an ambush interview.

The mayor, however, declined to disclose the details of her meeting with Bongbong and his sister, Senator Imee Marcos.

"Ang amo lang gi-istoryahan sa pagkakaron (What we discussed as of the moment) is how HNP in Davao Region can help in his [Marcos] bid for the presidency," she told Cebu press.

She, however, clarified that there are still no talks for a "Marcos-Duterte" tandem in the 2022 polls.

The mayor surprised the public when she arrived in Cebu on Friday, October 22, after weeks of isolation due to being positive for coronavirus.

Duterte-Carpio stunned her supporters when photos of her donning a green hoodie with "Sara All 2022" emblazoned on it went viral online. Sara All Philippines 2022 is one of the groups urging her to run for president in the 2022 elections.

Meanwhile, the Presidential daughter relayed that she is "happy" and "overjoyed" with the support of the Cebuanos whenever she visits the province.

The mayor earlier declared that she will not be running for the highest electoral position despite calls from her supporters.

Duterte-Carpio will instead be running as a reelectionist for Davao City mayor.

The mayor has kept mum on the possibility that there will be a "switching" in presidential nominations, similar to what happened to her father President Rodrigo Duterte in the 2016 elections.

PDP-Laban, the President's political party, fielded Senator Bato dela Rosa as its standard-bearer in the 2022 elections.

Presidential Spokesperson Harry Roque, however, said on October 8 that Duterte-Carpio will not be a substitute candidate to Dela Rosa.

Parallel groups in the region are still hopeful that she would still reconsider running for the highest national position in next year’s election. (With reports from SunStar Cebu)