'The President has spoken,' Tan says as Duterte clears him from illegal drugs link 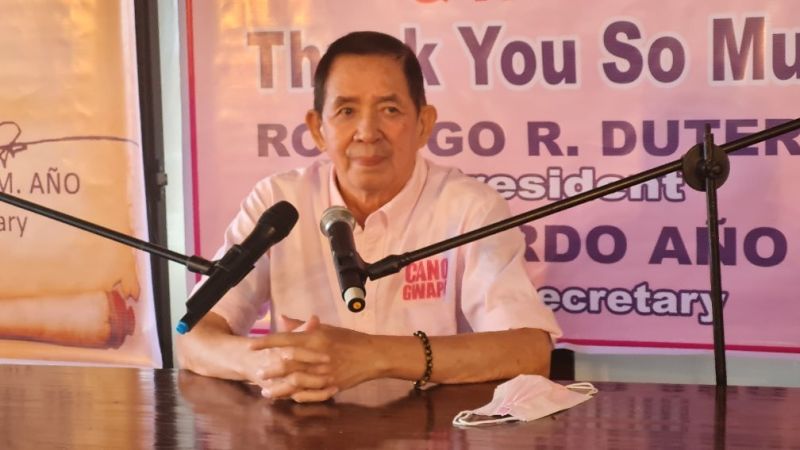 BACOLOD. Former Bacolod City councilor Ricardo Tan, in a press conference at his family-owned Campuestohan Highland Resort in Talisay City over the weekend, said the certification issued by the DILG clearing his name from illegal drugs link is an end to a bad dream. (Erwin P. Nicavera photo)

"THIS is it. The President has spoken.”

This was stressed by businessman and former Bacolod City councilor Ricardo "Cano" Tan after President Rodrigo Duterte has cleared his name and that of his family from any links or participation in alleged illegal drug trade activities.

Apparently relieved, Tan said, “he gave me my absolute freedom (and) I stand proud now before the public as a vindicated man.”

In a press conference at their family-owned Campuestohan Highland Resort in Talisay City, Negros Occidental on Saturday, October 23, he showed the copy of a certification issued by the Department of the Interior and Local Government (DILG) and signed by Secretary Eduardo Año and approved by Duterte.

Tan just recently received the copy of the certification, he said.

The certification dated August 11, 2021, reads, “This is to certify that Mr. Ricardo “Cano” Tan, Bacolod City has been removed from/delisted from the Inter-Agency Drug Information Database (IADID)”.

The certification was pursuant to the recommendation of the Review, Evaluation and Management of the IADID Committee and approved by Duterte through a memorandum dated July 31, 2021.

“I considered this as the most significant gift and blessings I received from God and the President, which brought back my freedom as a well-meaning citizen of Bacolod City and this country," Tan said.

He said this certification has brought back his good name.

Tan added that the certification resulted from the validation and revalidation conducted by the Inter-Agency Task Force as indicated in the certification issued by former Police Regional Office-Western Visayas Director Brigadier General Rene Pamuspusan.

In August 2020, Tan obtained a copy of the certification issued by Pamuspusan clearing his name and that of his family from any links or participation in alleged illegal drug trade activities.

Tan said the task force has recommended clearing his name from all forms of illegal drug activities, and the same was submitted to the Office of the President for his approval.

"This is justice in black and white (and) is proof that Cano Tan did not engage in any illegal drug activity in Bacolod City and elsewhere,” the former councilor stressed.

He thanked Duterte for what he said was an objective review of his circumstance and for speaking the truth about his innocence that will ultimately help expunge all allegations, doubts, and intrigues fabricated against him spread through fake news.

Tan also thanked the members of the Inter-Agency Committee for giving him the due process that finally rendered him an innocent man.

"This certification, signed by Secretary Año bearing the approval of President Duterte, is not just a piece of paper but symbolizes my freedom from all accusations against me and my family. Justice has been served, and the buck stops here," he said.

"Time and again, I have vehemently denied any involvement in any form of illegal drug activity that even the lifeless King Kong (at the Campuestohan Resort) was dragged into controversy,” he said.

Tan reiterated that he is just an ordinary person who worked hard to achieve what he has dreamed of in his life.

“Our success was attained through legal and decent ways. And this has convinced the Inter-Agency Task Force and President Duterte to clear my name and I am here now in front of you to tell you the truth," Tan said.

With the certification issued clearing his name from illegal drugs link, Tan is hopeful that those responsible for sowing intrigues against him will cease.

Asked for a message against those people who made it worse for him and his family, he said, “I beg you to please, let me be your last victim and now, let me continue to do my best for my family and the people of Bacolod City.”

“My family has also suffered with me (and) my friends and other people who knew me well could not believe what the fake news had pictured out about me that was clothed with false and malicious accusations,” he said.

“But lies travel fast and now, lies have no place in Bacolod City and our society," he also said.

Tan said he pursued finding the path of justice and vindication while ensuring his safety.

On October 8, 2021, Tan filed his certificate for candidacy for councilor of Bacolod. He said he heard some people and quarters asking why he should seek public office when his name was linked to illegal drugs.

"Again, I am innocent of all the charges against me, and I know God and the Government are with me. So why would I be afraid to offer my services again to the public?” he asked.

“When we are put to the test, we must never give up on seeking justice because justice will always be served when you do good. I always say nga si Cano Gwapo indi kawatan. (I am not a thief) because I stand firm against all forms of corruption and illegal activities. I have surpassed the biggest challenge in my life,” Tan said.

Tan thanked his friends for their prayers and moral support, and the priests and pastors who prayed for him as well.

It can be recalled that in December 2018, Tan was ambushed along with his wife, Nita, in Barangay Alangilan, Bacolod City.

The couple was on board a Nissan Patrol on their way home when they were shot several times by at least three unidentified suspects.

Both were wounded but survived the attack.

About a month after the ambush, Duterte linked Tan to the illegal drug trade.

The President made this pronouncement during his speech before an audience at the birthday party of a local businessman on January 12, 2019.

In May 2020, barely two years and five months after the ambush, Tan made his first public appearance to announce that he "made it through the storm" after having been cleared from alleged illegal drug links.