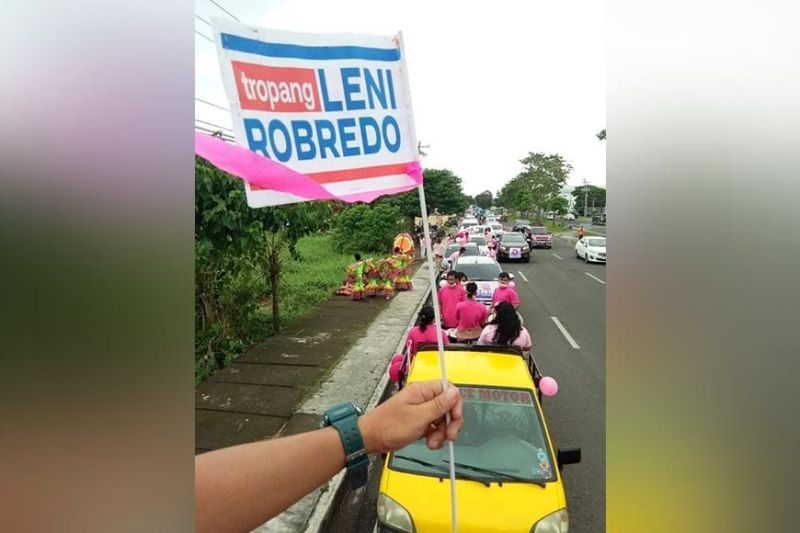 NEGROS. Some of about 500 vehicles joining the nationwide caravan in Negros Occidental over the weekend to show their support to the presidential bid of Vice President Leni Robredo. (Franzen Morales photo)

FOR the supporters of Vice President Leni Robredo in Negros Occidental, the caravan they staged over the weekend showed a strong force of support of the Negrenses for her presidential bid.

Mirano-Ocampo said they were overwhelmed to see such a volume of supporters, who were all volunteers, participating in the activity despite the short preparation.

“We had only five days, our invitations were just through Facebook, but many showed up,” she said, adding that “this shows their strong and overwhelming support for Vice President Robredo.”

The group said the participants of the caravan came from as far as Hinoba-an in the south and Cadiz City in the north. Some were stationed in Talisay City and converged with those in Bacolod City.

There were drum beaters and MassKara Festival dancers during the caravan which moved around the major thoroughfare of Bacolod City including Araneta Street, Burgos Street, Lacson Street and Reclamation Area.

It ended on South Capitol Road beside the Provincial Capitol Lagoon and Park.

Mirano-Ocampo said the participants came from A, B, C and D classes, and that they are all private individuals who volunteered for the caravan for Robredo.

“We have no political agenda here, all who participated here were not paid. We have no free meals, free gas or whatever. This is just purely volunteerism,” she said, thanking the donors of “pink pandesal” that were distributed during the caravan.

Mirano-Ocampo said this is just the start of the many activities that LLNO is planning to make in support of Robredo's bid for the presidency.

Aside from the billboard they placed along Araneta Street near the Negros Occidental High School, there will be two more billboards to be placed in various areas in the city showing their support to the vice president.

“We raised the fund for this billboard project,” she said, adding that they are now preparing for Robredo’s visit to the province on November 5.

Moreover, the participants of the caravan are from various sectors, groups and professions like doctors, lawyers and advocates.

One of them was the Negros Youth for Leni, whose members shared funds to rent a jeepney to be used during the caravan.

Its volunteer, Joshua Villalobos, said “as an environmental activist, I am supporting Vice President Leni Robredo because I believe that in this type of political climate it will be hard to campaign for the environment, human rights, and for democracy.”

Villalobos said that with the kind of situation that we are in right now, there’s a need for people to go out.

“As the words of Leni, kailangan nating pumiglas sa kasalukuyang sitwasyon,” he said, adding that “under Leni, we are not saying that there will be no environment woes and human rights violation, but at least we can move in a wider democratic space."