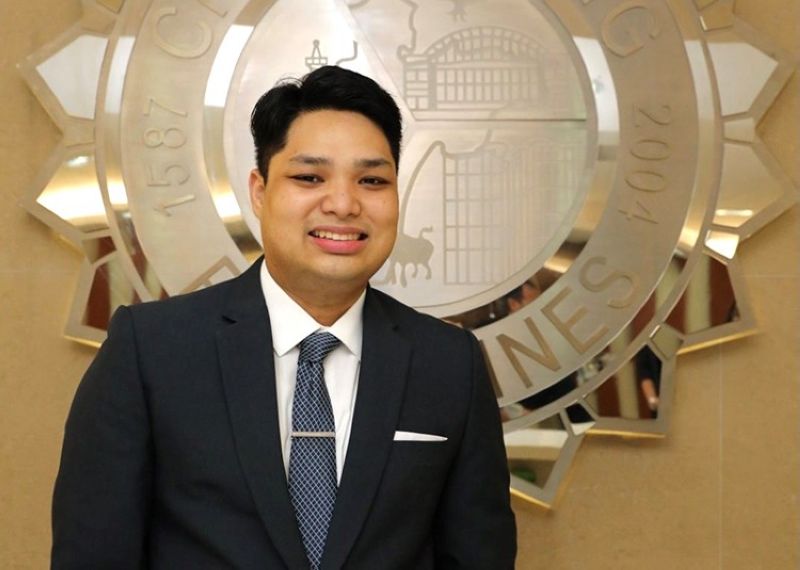 The award was presented in an online ceremony on October 21, 2021, with IAP members from all over the world in attendance.

“We all know that being a prosecutor is the most enjoyable, satisfying, and dutiful profession one can have. A profession at the service of justice,” said IAP Secretary General Han Moraal at the start of the ceremony.

“We know that being a prosecutor can also mean hardship, facing closely the most terrible crimes of this society. Nevertheless, society is asking us to just do our job. It is for that dedication, that hardship of the profession of the prosecutor that the International Association of Prosecutors created its award program,” he added.

The IAP is a non-governmental organization of prosecutors. Represented by over 170 countries, the IAP aims to raise standards for prosecutors worldwide.

“For his work in fighting the online abuse of children, the IAP awards a Special Achievement Award to David Michael Go of the Philippine Justice Department... The well-being of the child is foremost on the mind of Prosecutor Go as he manages cases that often involve foreign evidence and evidence that is often trauma-inducing for its victims,” the IAP said as it presented the award to Go.

“Amidst the revelry and celebration, let me take this opportunity to say that my country’s fight to end modern slavery, sexual exploitation of children, and human trafficking continues. These crimes are very much alive in my country,” said Go as he accepted the award.

“Although efforts are being made to put an end to these, the only way we can make a difference is for all justice stakeholders in different parts of the world to come together to raise awareness and to put in safeguards to make sure that no one will be sexually exploited or taken advantage of for whatever reason. May this serve as an inspiration that we are not powerless in ending these crimes,” he added.

While accepting the award, Go acknowledged the work of International Justice Mission Philippines (IJM), an organization focused on supporting the Philippine government in ending the online sexual exploitation of children.

“I would like to thank the International Justice Mission Philippines for their invaluable assistance in all the cases I have handled or am handling,” he said.

“We, at IJM, commend Prosecutor Go, and our Department of Justice, for the unwavering resolve to protect our children and uphold public safety,” said lawyer Sam Inocencio, regional vice president of IJM’s Global Programs Against Online Sexual Exploitation of Children, in response to Go’s award.

“Among Prosecutor Go’s notable achievements is pursuing child protective prosecution strategies. While the work of justice holds criminals accountable, it is also about protecting the interests and dignity of survivors, and Prosecutor Go's work is a demonstration of this. His insights, experience, and leadership have certainly raised the bar for excellence and public service,” Inocencio added.

“It is our privilege to work with Prosecutor Go, and our Department of Justice. Prosecutor Go's work is a testament to the standards of prosecution in the Philippines, and a reflection of the excellence of our prosecutors, most notably those who are at the forefront of protecting child survivors of online sexual exploitation,” added lawyer Lisa Guevara-Garcia, director of the National Prosecution at International Justice Mission.

In a case referred to by foreign law enforcement, a 13-year-old boy, 11-year-old, and eight-year-old girls were abused to create CSEM. Go's efforts helped secure a conviction in 2020. In the middle of a global pandemic and amid varying levels of lockdowns and community quarantines throughout the country, the accused was sentenced to 40 years of imprisonment for violating the country’s Anti-Child Pornography Act.

Go’s workplace puts heavy emphasis on preventing re-traumatization of the survivor. He has successfully prosecuted two accused local female traffickers, one of whom was related to the victims. A four-year-old boy and two girls aged 2 and 9, were offered to offenders in foreign countries. Two of these victims were children of one of the female suspects, while the third victim was the cousin of this same suspect.

To protect the children’s psychological safety, Go agreed for the accused to plea to a lesser offense. This route spared the children from possible additional trauma from taking the witness stand.

In recent years, the Philippine government has made significant advancements in prosecution for cases involving the online sexual exploitation of children. The work has resulted in an increased number of victim-centered investigations, prosecutions, and convictions in the area of online sexual exploitation. Improvements in law enforcement capacity and resources have led to 118 rescue operations, wherein 84 perpetrators were arrested and 373 victims brought to safety within the last four years.

With over half of victims being 12 years old or younger, the use of VIDI (Video In-Depth Interviews) safeguards survivors from further contact with the abuser. Plea agreements protected survivors from having to testify in court, shielding them from potential re-traumatization during criminal proceedings.

As a result of these interventions, 91 out of 127 convictions in the past four years were achieved through plea bargains, protecting over 100 survivors from the risks and challenges of a full trial.

Ruby (a pseudonym) was rescued from captivity and online sexual exploitation by the Philippine authorities and is now a survivor leader at IJM.

“Protecting survivors is as important as rescuing them,” Ruby says. “Especially those ones with perpetrators that is a family member or relative...it is very important to place survivors in a place where they can feel safe, cared and protected. Also we should make sure that the child or survivor knows and understands why she has to be in that place. She has to know that she was abused, and there is this law to protect them and will punish their perpetrators. There will be times also that the survivor may find it hard to cooperate and testify against their perpetrators because they are afraid to face them again.”

Go's work continues to safeguard the survivor’s welfare in the process of seeking justice.

The Department of Justice Inter-Agency Council Against Trafficking (Iacat) commended Go in a statement:

“We, at the Iacat, congratulate Assistant City Prosecutor David Michael Go of the Office of the City Prosecutor of Taguig City for his recognition in the International Association of Prosecutors Awards 2021. His steadfast leadership in the judicial reform and the rule of law through innovative child prosecution strategies, such as plea bargaining and maximizing the use of digital evidence instead of heavily relying on the victim’s testimony, affirms Iacat’s direction towards prosecution that protects the rights and welfare of the child against re-traumatization. His continued search and application of these strategies to the prosecution of Trafficking in persons (TIP), especially the online sexual exploitation of children case is commendable and worth replicating. This award also affirms the work being done in courtrooms to eradicate this horrific crime and is a testament to the standards of excellence in the administration of justice in the Philippines. Thank you for elevating the banner of the Philippine Prosecutors in the international arena.”