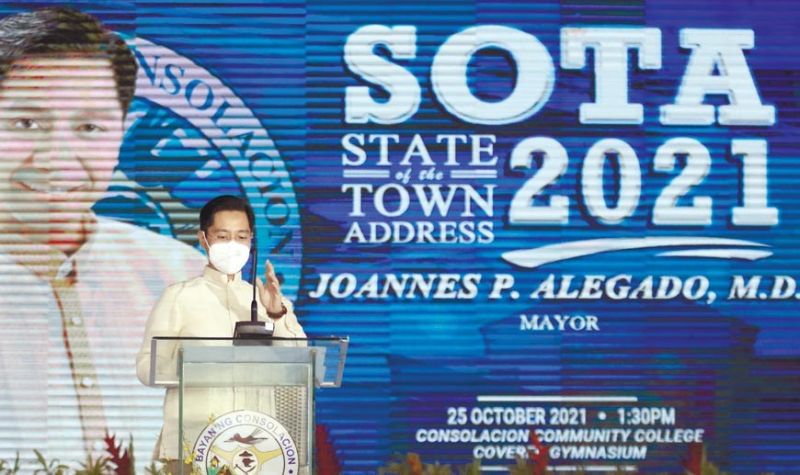 CONSOLACION, Cebu Mayor Joannes “Joyjoy” Alegado said his administration will not turn back on its plan to undertake the controversial Seafront City reclamation project in Barangay Tayud, despite opposition from various groups.

In his State of the Town Address on Monday, Oct. 25, 2021, Alegado said his office will continue with the implementation of the project, adding that its creation would mean economic progress of the town and the rest of Metro Cebu.

He said this will be one of the projects that he will focus on in his remaining months as the town’s mayor.

Another big-budget project in Tayud, this one by the national government, is the construction of the new Cebu International Container Port (CICP).

The construction of CICP is set to begin in January 2022.

As for the reclamation project, it will take years to become reality, said Alegado.

Alegado said they are already in the application phase, and they are dealing with government agencies and different stakeholders.

The mayor’s mother, Vice Mayor Teresa “Nene” Alegado, said should she win as Consolacion mayor in the 2022 elections, she will continue all the projects that her son has started, particularly the Seafront City project.

Meanwhile, the Maritime Industry Authority (Marina) has sought a relocation area for 12 shipyards that will be displaced if the proposed Seafront City reclamation project is implemented.

On its Facebook page Monday, Oct. 25, Marina Administrator Vice Admiral Robert Empedrad said the Marina had already written a letter to Mayor Alegado, explaining the authority’s position on the matter.

Empedrad said the 12 shipyards that would be displaced by the development had served more than 300 ships in 2019.

He said it was not only commercial ships, but also government ships, such as patrol and naval assets, that would be affected by the shipyards’ displacement, as ships of the Philippine Coast Guard and the Philippine Navy also have their maintenance and repairs done in Consolacion.

Seafront City is a 235.80-hectare reclamation project to be undertaken by the Municipality of Consolacion and a private firm, La Consolacion Seafront Development Inc.

The project is targeted to be a mixed-use Smart City Estate that will have commercial, tourist, entrepreneur, residential and institutional components, the last of which would include government buildings, auditoriums, schools, churches and civic centers.

The project has been met with opposition from shipyard operators and other residents in the area, who said the project will result in the unemployment of thousands due to the closure of the commercial shipyards of Consolacion.

Last month, members of the Shipyard Association of Consolacion Cebu, who said they serve 60 to 70 percent of all ships in Central Visayas and Northern Mindanao, criticized the local government of Consolacion for not providing “any feasible plans to protect the shipyards and affected locals in the area.”

Earlier this month, more than 100 residents composed of fishermen, motorcycle-for-hire drivers, tricycle drivers, operators of eateries and owners of boarding houses that serve workers and visitors of the shipyards in the area also appealed to President Rodrigo Duterte to stop the project, saying it would not only affect their livelihood but also their homes.

To disprove claims reportedly pushed by Mayor Alegado and other town officials that Tayud is no longer rich in marine resources, a group of at least 20 fishermen went out to the sea near the shipyards to catch fish.

Also, the Alliance for Progressive Labor has condemned the decision of the Bureau of Fisheries and Aquatic Resources for its “non-objection” to the Seafront City project.

On the other hand, Alegado told reporters that one of his biggest achievements in his almost three years of serving his constituents is the town’s Covid-19 response.

Alegado said they also doubled their efforts in the vaccination program in a bid to reach herd immunity.

The town has also improved its basic social services such as registering the births and the marriages of residents by visiting the town’s 21 barangays.

Alegado said they provided assistance in a form of livelihood to workers who lost their jobs in the pandemic. The Tulong Panghanapbuhay sa ating Disadvantaged Workers (Tupad) of the Department of Labor and Employment (Dole) helped 1,065 residents.

Aside from that, Alegado said they also undertook programs and projects for the protection, rehabilitation and preservation of the environment, and also implemented innovative agriculture programs. (KFD, CTL, PR)