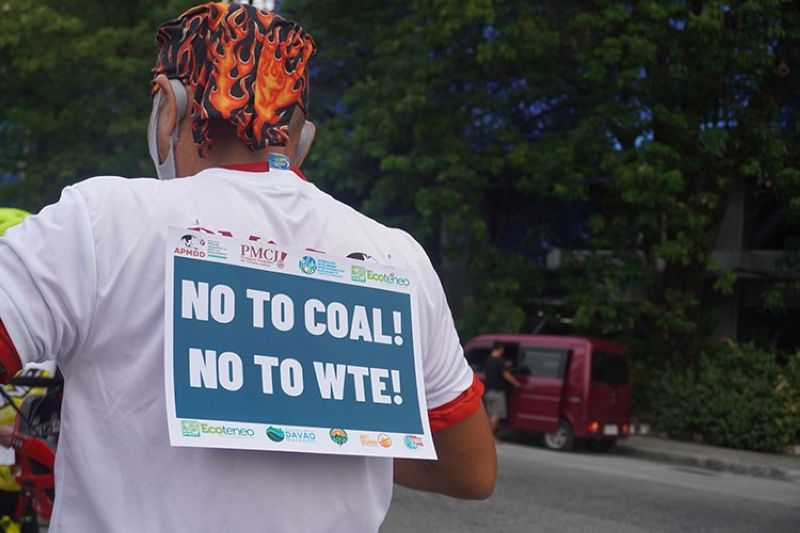 Environmental groups in Davao City continue to call for an urgent resolution to various local environmental issues in the city, including rejecting the waste-to-energy (WTE) incineration.

Rara Ada of the Philippine Movement for Climate Justice told SunStar Davao in a phone interview that they are still lobbying for the city government to drop the incineration project in solving the waste problems, and instead, look for alternative means in addressing it.

Ada said they are continuously urging the local government to reconsider the WTE project as this is not a solution for the city’s looming generated wastes.

“Instead of solving the garbage or waste problem, it caused another problem,” she said, adding that some countries who piloted the WTE incineration failed to address their waste problem.

“It is unfortunate that despite scientific evidence and legal implications on the WTE incineration, the city government continues to push such environmentally and health-threatening projects. I’m not sure what’s holding back the city from rejecting the project,” Peñalver said.

Davao City Mayor Sara Duterte-Carpio said in a previous radio interview that the city will push through with the WTE project despite continuous opposition from environmental groups.

“For us here in the City Government of Davao, we already crossed that bridge a long time ago when we purchased the property for the WTE plant in Davao City. It’s been decided already that there is a direction for WTE, and that we bought a property specifically for that purpose,” Duterte-Carpio said in an interview in early August this year.

The mayor urged them to raise their concerns to the Regional Development Council-Davao. However, she emphasized that the project has support from the Department of Environment and Natural Resources (DENR)-Davao.

The city is planning to construct a WTE project in a 10-hectare property in Biao Escuela, Tugbok District.

The WTE project has been identified as among the programs and campaigns that her administration is undertaking to achieve a “cleaner and greener city.”

Opposing the WTE project is one of the concerns raised by environmental groups during the Bike Action for Climate activity on Sunday, October 24.

Almost 60 bikers from different groups and organizations in Davao City are demanding those responsible for the climate crisis to do urgent and responsive climate action towards keeping global temperature rise below 1.5 Celsius.

Alongside the national and international call, Davao groups also aims to raise awareness on various local envi issues in the city such as plastic pollution, deterioration of our watersheds, decreasing urban green spaces, the plan to establish WTE incineration, among others.

“Kini pagpaghatag og pressure sa mga world leaders nga unta naay (This would give pressure to our world leaders to make) immediate or drastic action para i-address ang epekto sa (to address the effects of) climate change. Wala naman gud tay time nga i-talk lang ni. Ato panawagan is [to] walk the talk (We don;t have enough time to just talk about it. We are calling on them to walk the talk),” Ada said.

The organizers aim to raise awareness on various local environmental issues in the city such as plastic pollution, deterioration of our watersheds, decreasing urban green spaces, among others.

Overall, Ada said the local government is “walking the talk” in protecting the environment. Although she hopes that the city could do more by rejecting the WTE project.

Mayor Sara Duterte-Carpio issued Executive Order (EO) 47 on September 21, 2021, creating the DCCC, adding the city is not exempted from the worsening climate emergency with extreme weather events, rising temperatures, sea-level rise, heavy rainfall, and drought being experienced in other parts of the country. (RGL)