Kids 11 years old and below banned from Dolomite Beach 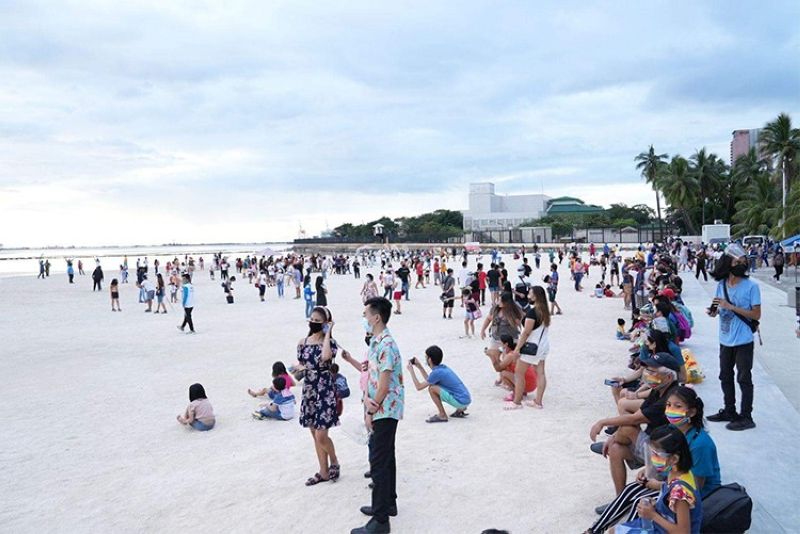 THE Inter-Agency Task Force (IATF) has banned the entry of children 11 years old and below to the Manila Bay Dolomite Beach.

Department of Environment and Natural Resources (DENR) Undersecretary Benny Antiporda said in a press briefing Tuesday, October 26, that the ban will stay while Metro Manila is under Alert Level 3.

“Everything will be recalibrated once a new alert level is issued by the IATF,” he said.

He said the decision was made during the IATF meeting Monday evening, October 25, after noting that thousands of people trooped to the beach especially last weekends.

“Based on information that we received, children are allowed as long as it is open area, but we saw that the area is crowded, especially during weekends. Grabe sa sobrang dami,” said Antiporda.

He said the DENR noted around 300 to 400 people on weekdays at a single time, but this number doubles on weekends.

He stressed though that the government has implemented some measures to limit the number of people inside the beach.

He stressed that they also make sure that social distancing is strictly implemented, as well as the other health protocols, such as wearing of face mask.

He said the ban aims to limit the people going to the Dolomite Beach and prevent the children 11 years old and below from getting infected with the coronavirus disease (Covid-19).

“Although the children, based on IATF guidelines, are allowed in open areas, remember that this (Dolomite Beach) is a crowded open area. We want to make sure that you will not get Covid-19,” Antiporda said.

He added that with the ban, the number of visitors is expected to decrease decrease.

He also said that the Dolomite Beach will be closed to public from October 29 to November 3 in observance of Undas (All Saints’ Day and All Souls’ Day).

Earlier, DENR Secretary Roy Cimatu cited the importance of the Dolomite Beach in the Manila Bay Rehabilitation Program, noting how the beach enhancement project can positively shape the mindset of the public on proper solid waste management.

In his keynote speech during the launch of the DENR’s Solid Waste Management Advocacy Campaign last October 15, Cimatu said he envisions the full restoration of the historic bay as a way to inspire Filipinos' behavioral change toward the environment.

"Why did we beautify the Baywalk when we can have just settled with its old appearance? You see, our intention is to dramatically change it so that when you enter there, your mindset and attitude will improve," Cimatu said.

"This is really our intention for doing this, for us not to go back to the old, dirty Manila Bay," he said. (Laureen Mondoñedo-Ynot/With PR)