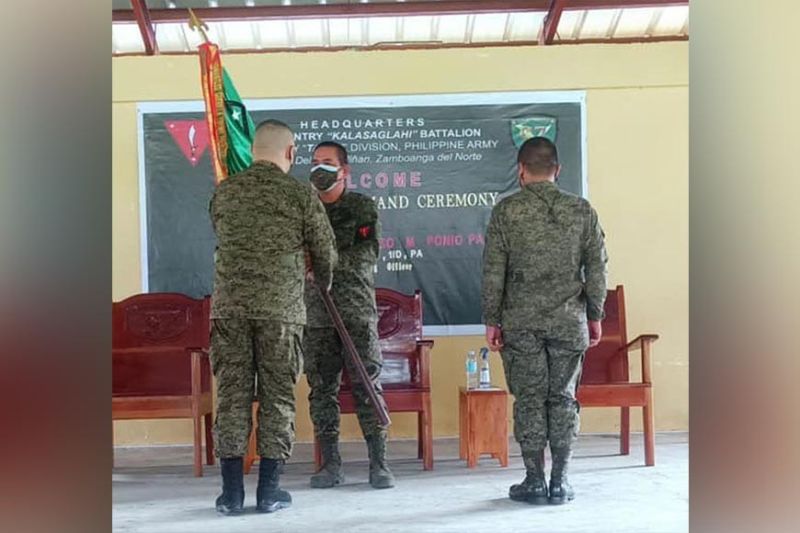 THE Army's 1st Infantry Division (ID) has installed the former executive officer of the 102nd Infantry Brigade as the new commander of the 97th Infantry Battalion (IB) based in Piñan, Zamboanga del Norte.

Installed as the new 97IB commander was Lieutenant Colonel Nolasco Coderos Jr., who took over the position from Lieutenant Colonel Manaros Boransing II, who will be designated as the assistant chief of staff for Civil-Military Operations of the 1ID.

Boransing served as 97IB commander for two years, from 2019-2021, and successfully led the unit in accomplishing its mission.

Also, 17 CTG-affected villages of Zamboanga del Norte were declared clear from enemy threats, apprehended four personalities who were wanted for various criminal charges, and one for possession of illegal drugs in support of Law Enforcement Operation.

Boransing is grateful to all the officers and enlisted personnel of the battalion for their unending support.

He also assured the incoming battalion commander that 97IB has a capable working force.

Coderos is thankful to Ponio for trusting his capability to lead the battalion and vowed to support the mission of the 102nd Infantry Brigade and the 1ID.

As the newly installed 97IB commander, Coderos addressed the "Kalasaglahi" troops and promised that he will work with them, prepare, and perform with them.

Meanwhile, Ponio thanked both the Bonransing and Corderos and advised the latter to trust his men and lead the battalion professionally, especially in managing the triad operations, resources, and personnel.

He also emphasized that military personnel should, at all times, display discipline, stay healthy during the pandemic, and have themselves vaccinated.

He urged the battalion to be more aggressive in ending the insurgency within its area of operation.