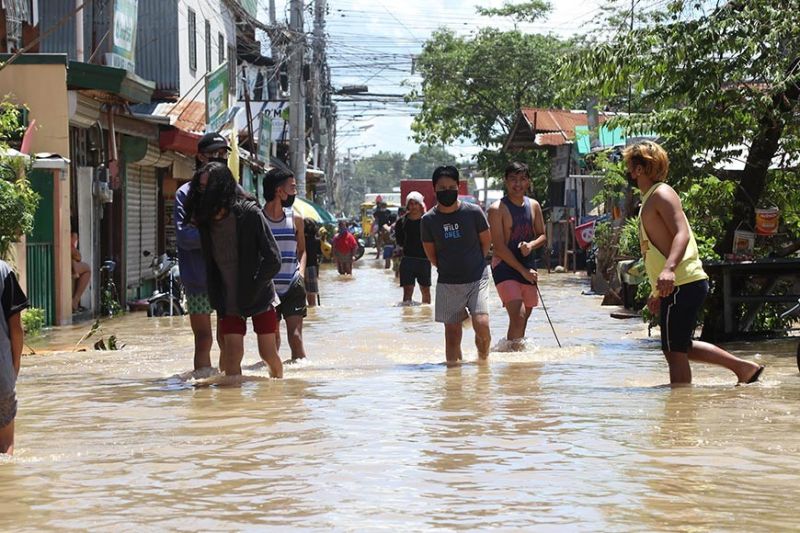 SOME residents in Davao City were stranded and affected by the flooding caused by heavy rains on Monday evening, October 25.

Based on initial data from the City Disaster Risk Reduction and Management Office (CDRRMO) as of Tuesday morning, October 26, around 400 families in the city were affected by the flood.

CDRRMO head Alfredo Baloran said there were no recorded casualties after the flooding.

The heavy rain inundated many parts of the city, including the downtown area, and had caused an overflow of rivers and creeks.

The long stretch of Roxas Avenue was flooded after its canal overflowed following the heavy downpour.

Motorists were also stranded due to street flooding along Roxas Avenue and J.P Laurel that was due to “sea-water rise from waters in big rivers which back-flowed.” The flood level reached as high as more than one meter in these areas.

Waist-high flood was also reported in some parts of Buhangin District, including NHA Buhangin and Laverna Hills Subdivision, a known flood-prone area.

Some residents in Matina Pangi and Matina Crossing were also evacuated due to the overflow of the Matina River.

Matina Crossing Barangay Captain Joel Santes said that 600 families evacuated to the Barangay Matina Crossing Gym. The residents temporarily occupied all four floors of the building and returned to their homes when the flood level subsided.

Santes said it is fortunate that the water did not reach the levels of the 2011 flooding.

He added that flood mitigation measures are already in place near the river area and some residents have constructed additional floors at their houses.

Cabantian Barangay Captain Nilo Cabiles, meanwhile, said that more or less 250 households in Laverna Hills were affected by the flooding.

He said that while the affected residents have returned to their homes, they are requesting medicine for Leptospirosis.

Cabiles also said their barangay needs extra clothes and food, which may be brought to the purok leaders or the parish in the area.

The barangay head said that a total of five households were also rescued in Soraya Subdivision. As the water already subsided, the residents already returned to their respective houses.

The flood waters in some parts of downtown had subsided around 11 p.m. But in some parts of the city the next day, October 26, some areas like R. Castillo and Damosa were still flooded in the morning.

The heavy rains with strong winds had also resulted in an unplanned power interruption in several areas in the city.

The Davao Light and Power Company (DLPC) reported that parts of its franchise experienced power interruption due to heavy rain, strong wind and thunderstorm.

DLPC apologized for the inconvenience brought about the emergency interruptions.

Power was restored around 10 p.m.

Baloran said that Monday’s thunderstorm was brought by the Inter-Tropical Convergence Zone (ITCZ). He said the ITCZ often creates thunderstorms, as it is the breaking ground of a low pressure area (LPA) that creates typhoons.

Baloran reiterated his call for people to be more cautious and mindful as La Niña brings heavy downpours that could suddenly occur during the day and is expected to stay until the first quarter of next year, 2022.