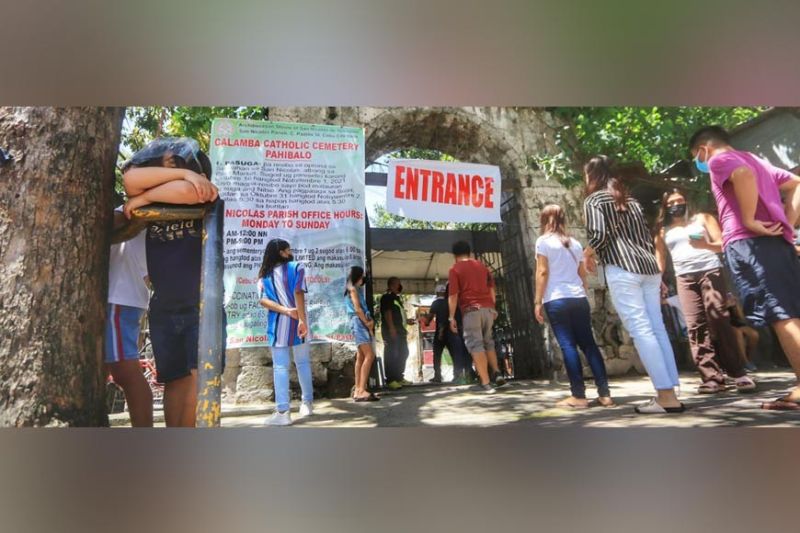 KALAG-KALAG’ PREPARATIONS. If all things were normal without the Covid-19 pandemic, Calamba Cemetery along V. Rama Ave., one of Cebu City’s busiest cemeteries, would be teeming with activity during the All Saints’ and All Souls’ Day celebrations on Nov. 1 and 2 respectively. This year, 2021, people began to troop to Calamba to visit their dead over the weekend upon learning that cemeteries may be closed to avoid a spread of the coronavirus disease. Minors and those above 65 years old are not allowed inside cemeteries. Meanwhile, to ensure that health protocols will be followed at all times, City Hall personnel were dispatched to monitor people coming in and out of public cemeteries. In Calamba, two buses were also parked outside the cemetery for possible protocol violators as police and military men stood guard. (Amper Campaña)

THE tri-cities of Cebu, Mandaue and Lapu-Lapu will now close their cemeteries, memorial parks and columbaria from Oct. 29 to Nov. 2, 2021 in accordance with guidelines set last week by the Inter-Agency Task Force (IATF) for the Management of Emerging Infectious Diseases for the observance of Undas/Kalag-Kalag.

Earlier, the mayors of the three cities had said they would stick to the closure schedules they had already announced for their own cities before the IATF guidelines were released.

In Mandaue City, Mayor Jonas Cortes on Monday, Oct. 25, issued Executive Order (EO) 35-A closing all private and public cemeteries, memorial parks and columbaria in the city from Oct. 29 to Nov. 2, 2021.

Under EO 35-A, only burial and cremation activities would be allowed in cemeteries and memorial parks during these dates, subject to the observance of minimum health standards.

The new EO amends EO 35, which had approved the closure of cemeteries, memorial parks and columbaria for a shorter period, or only from Oct. 31 to Nov. 2.

In Lapu-Lapu City, public information officer Mark Anthony Bautista said Tuesday, Oct. 26, that the Lapu-Lapu City Government’s appeal to the IATF to keep cemeteries open on the 29th and the 30th, based on Mayor Junard Chan’s EO issued two weeks ago, had been denied.

“So technically, cemeteries will be closed on the 29th of October to November 2,” Bautista said.

Under Chan’s EO 2021-054 issued last Oct. 12, all cemeteries, memorial parks and columbaria were to be closed also only from Oct. 31 to Nov. 2, 2021 to prevent mass gatherings that could cause coronavirus disease (Covid-19) transmission.

Michael Rama, acting mayor of Cebu City, has also appealed to the IATF to allow his Directive 10-14-01 to stand.

Rama’s directive keeps cemeteries and columbaria open even on All Saints’ Day (Nov. 1) and All Souls’ Day (Nov. 2) but only for fully vaccinated persons.

Rama said while there has been no official response yet from the IATF, he was informed by Cabinet Secretary Karlo Nograles, who sits as co-chairperson of the IATF, that his request has been denied.

“Definitely, we are not hard- headed. We are also mindful. They may have reason at their level though we also have reason of readiness to have it acted upon so dili lang usa ta mamugos (let’s not force it),” said Rama. (FVQ, PAC)