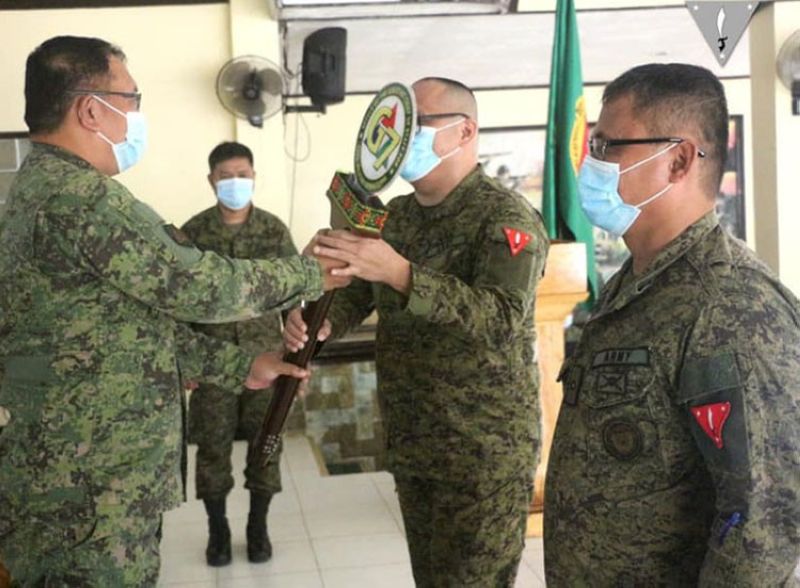 ZAMBOANGA. The 1st Infantry Division (ID) installs Lieutenant Colonel Manaros Boransing (2nd from right), as the new Civil-Military Operations officer, and Colonel Manuel Leo Gador (not on photo) as the new head of the Office of the Assistant Chief of Staff for Personnel. A photo handout shows Colonel Pompeyo Jason Almagro, 1ID chief of staff, hands over the office symbol to Boransing a simple ceremony Tuesday, October 26, at the 1ID's officers club. (SunStar Zamboanga)

THE 1st Infantry Division (ID), the premier command of the Philippine Army, has implemented changes among its staff offices at the division headquarters.

Colonel Manuel Leo Gador has been assigned as the new head of the Office of the Assistant Chief of Staff for Personnel replacing Major Jolly Flores Jr., who was the acting Personnel Staff Officer and the current Division Adjutant.

The position is not new to Gador as he has worked with the Personnel office of the Philippine Army as the chief of the Admin Branch from 2015 to 2016.

Before his assignment with 1ID, Gador was the assistant chief of staff for Education and Training of the 8th Infantry Division in Catbalogan, Samar.

Boransing II is an experienced CMO Officer. He was an instructor of the CMO school; handled CMO position with the Civil Affairs Group, now Civil-Military Operations Regiment; and was the chief, Public Affairs Branch of the Army's CMO from 2011-2014.

Almagro, in his message, expressed his confidence to the newly installed personnel and CMO chiefs.

Almagro said he is certain that both senior officers will do an excellent job considering their expertise and resilience as a leader. (SunStar Zamboanga)