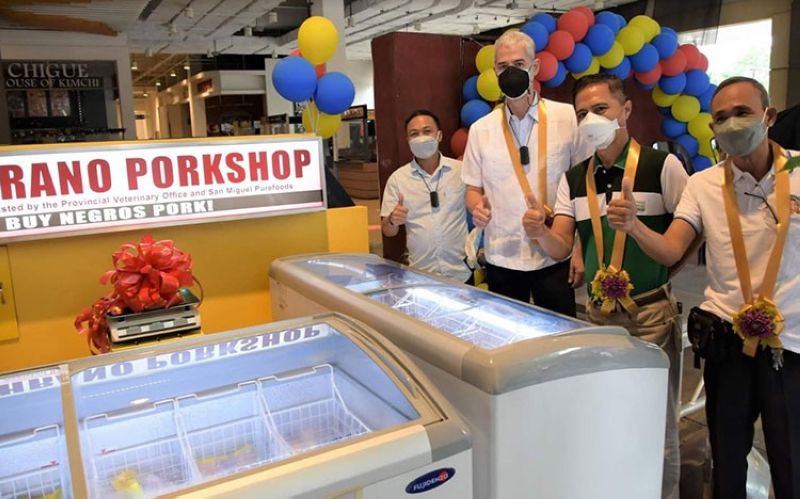 The Ahrano Porkshop specifically located at the mall's Fiesta Market was a joint effort of the Provincial Veterinary Office (PVO) and the alliance with assistance from San Miguel Foods.

The members of Ahrano will manage the project, which is seen to generate more income for its members as well as other local swine breeders.

Governor Eugenio Jose Lacson, who spoke at the blessing and inauguration rites, said the integrity of Ahrano officers and cooperation among its members will create a sustainable livelihood project.

"Also, it will bring about economic benefits not only to their association but also to the entire hog industry of the province," he added.

Selling high quality meat products, this is the first pork shop outlet of the hog raisers group stationed within a mall.

"The group commits to delivering effectively its role in attaining poverty alleviation as well as growth and development of the livestock industry as the provincial government continues to work on improving lives of the Negrenses," he added.

Ahrano is an umbrella organization of backyard and semi-commercial hog raisers in the province comprising 27 local government unit-based associations and two federations composed of 24 barangay-level associations with about 15,000 individual members.

The PVO, which has been helping in the organization and operation of Ahrano and its members, aims to help promote and advance growth of the swine industry, especially marketing advancement.

Decena said that for over a decade, the group had been a devoted partner organization of the PVO in the implementation of swine genetic project that has benefited backyard raisers and the entire local swine industry.

"Today, Ahrano continues to grow in number, became more cohesive, empowered and has attained a level of remarkable productivity," he said, adding that the group constantly accepts the challenging tasks to embark on hog buying and meat shop operation provincewide.