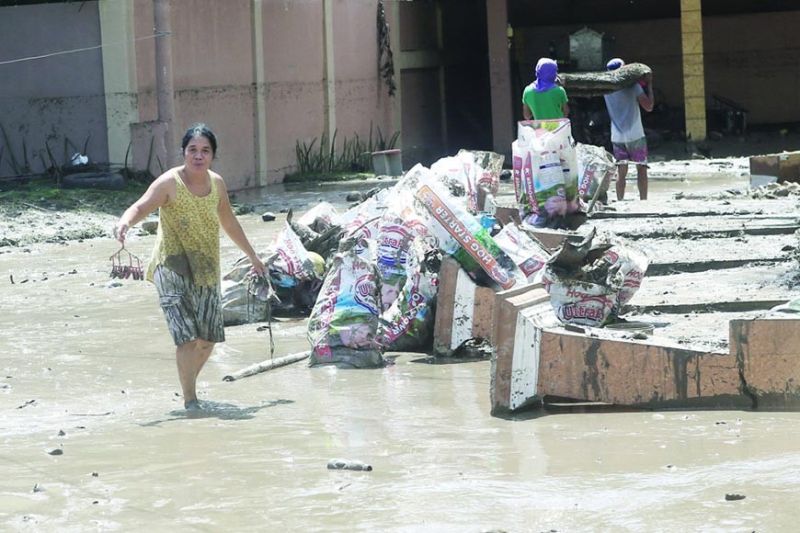 POST-FLOOD CLEANUP. A woman recovers some of her belongings that were swept away by the floods that occurred in Sogod town, northern Cebu on Monday, Oct. 25, 2021. / Alan Tangcawan

A LOCALIZED thunderstorm was to blame for the heavy flooding that occurred in Sogod, northern Cebu on Monday, Oct. 25, 2021, that displaced more than 214 families.

Al Quiblat, Philippine Atmospheric, Geophysical and Astronomical Services Administration (Pagasa)-Mactan chief, told SunStar Cebu that the thunderstorm that hit Sogod brought around 31.5 millimeters of rainfall, equivalent to around 150,000 drums of water, within half an hour.

Weather officials were able to secure data on Sogod’s situation through a rain gauge they had installed in the neighboring town of Catmon.

Quiblat said even though isolated, thunderstorms often bring a lot of hazards like the sudden onslaught of heavy rain in a short duration that causes flash floods and landslides.

He said the weather station managed to issue a thunderstorm warning at around 3:43 p.m.

“Localized thunderstorms are always there especially since we are under La Niña even if there is sunny weather in the morning. Always be mindful of our warnings in our social media and other platforms,” he said.

He added that the public should also watch out for the weather and plan in advance for any worst-case scenario that might happen.

“Do not expose yourself outside. Seek shelter. When you are inside your house or inside a building and you hear thunder and see lightning, do not touch anything that is made of metal,” he said.

On Monday evening, Oct. 25, five barangays in Sogod namely Poblacion, Bagatayam, Damolog, Bawo and Ibabao were affected by the sudden heavy rains that hit the town.

Aside from knee- to neck-deep flooding, some areas in the town were reportedly hit by a tornado.

Meanwhile, Quiblat said Pagasa declared the onset of Amihan or the northeast monsoon on Oct. 25, 2021, which is earlier than the normal, which is the first week to second week of November. (JOB)