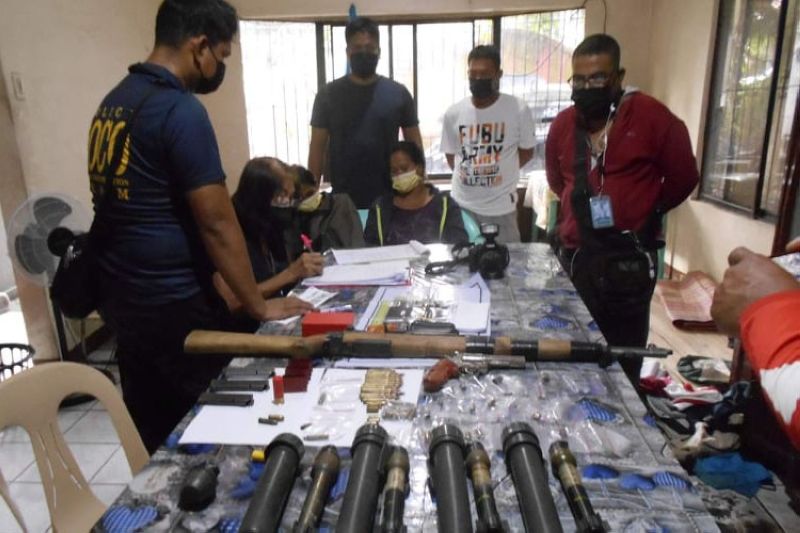 Authorities recover from the rented house of fugitive Archelito Dumip-ig an M1 Garan Rifle, a caliber .38 revolver, four riffle and hand grenades, two sachets of suspected shabu and an improvised tooter, among others, in an operation at Barangay 3 Poblacion in La Carlota City yesterday, October 27. The suspect shot an arresting police and evaded arrest. (La Carlota City Police Station Photo)

Operatives of La Carlota City Police Station were supposed to apprehend Dumip-ig on the strength of an arrest warrant for attempted homicide, Guadalupe said.

The arrest warrant was issued by Calatrava Municipal Trial Circuit Court Judge Charmaine Mascardo on March 16, 2021 with recommended bail of P36, 000, he said.

The police chief added that instead of surrendering, Dumip-ig fired a shot at the apprehending law enforcers hitting Police Corporal Rommel Blanco on his right hand.

Blanco was rushed to a hospital in Bacolod City but Guadalupe said he has no idea as of this writing if the policeman was already released.

Also, it was not clear if Dumip-ig was wounded as he evaded arrest.

Meanwhile, two women working as cooks at the rented place of Dumip-ig were taken into police custody.

He said the two were invited for questioning because they were at the scene of the incident.

The police recovered from the suspect’s rented house an M1 Garan Rifle, a caliber .38 revolver, four riffle and hand grenades, two sachets of suspected shabu and an improvised tooter, among others, Guadalupe added.

A manhunt operation against Dumip-ig was launched yesterday.

Luckily, Gabutero was not hit and only sustained bruises after he fell from his motorcycle while Dumip-ig fled.

Guadalupe, though, said that Dumip-ig is not in the list of their most wanted personality.*