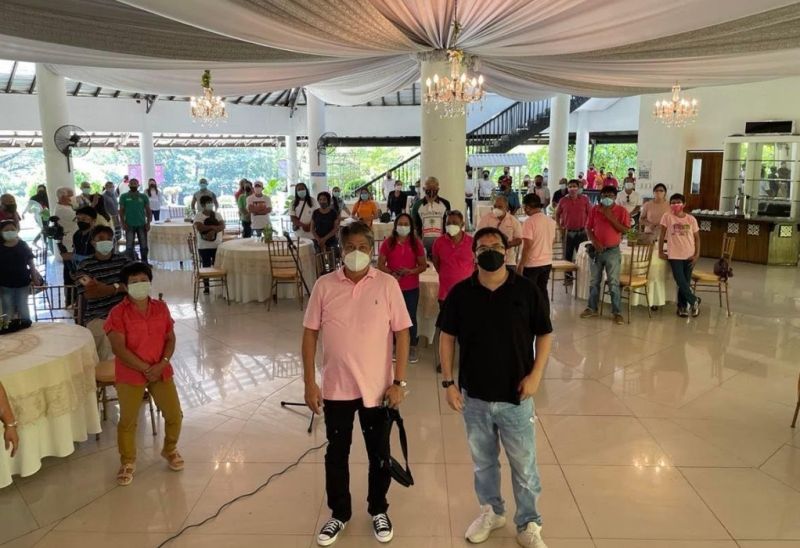 BACOLOD. Senator Francis 'Kiko' Pangilinan with Ramon Uy Jr. and other local organic farmers and practitioners during a dialogue held at May’s Organic Garden in Bacolod City over the weekend. (Contributed photo)

Pangilinan, who held a dialogue with about 80 local organic farmers and leaders at May’s Organic Garden in Bacolod City over the weekend, said under Republic Act 11511, an act amending Republic Act 10068 or the Organic Agriculture Law of 2010, restrictions on the accreditation had been loosened up.

“We brought it down to the local level, opened it up so that it would be easier and cheaper,” he said, stressing that under the previous law, the accreditation fee ranges from P100,000 to P200,000.

For now, it is only between P600 to P2,000 so this will encourage more organic farmers and practitioners to go into the accreditation process, the senator added.

The dialogue, Pangilinan said, is part of the effort to aggressively inform farmers in the country and make them more aware of the provisions of the amended law on organic agriculture which he principally authored.

He said under the new law, which is already taking effect, there will be organic certification bodies clustered at the local level.

This is unlike the previous third-party accreditation only, which is more complicated and centralized.

Pangilinan said with the Participatory Guarantee System (PGS), it now includes the private sector and government “so that it’s going to be hybrid self-regulation.”

This meant that the sector itself protects the integrity of the certification process, he said.

The senator admitted that the implementation aspect of the law is a bigger challenge.

“I’m an organic farmer myself, so we will put in necessary resources and make sure that the law is implemented effectively,” Pangilinan said, adding that “we are looking at doubling the budget for agriculture within the period of six years.”

Part of that is intended for significant increase in terms of government support for organic agriculture, the official added.

Considered the Philippines' leader in terms of organic agriculture, Negros Occidental currently has over 17,000 organic farming practitioners with about 16,000 hectares of farms devoted to organic production.

Ramon Uy Jr., a member of the Organik na Negros! Organic Producers and Retailers Association (Onopra), said there were about 500 organic farmers with over 1,000 hectares of area accredited through a third-party system.

Uy, however, said the accreditation of most of these farmers and practitioners has already expired. They are now moving towards PGS certification under the amended law.

"It’s a cheaper certification option and affordable for small organic farmers who comprise at least 95 percent of the organic agriculture sector in the Philippines,” he said, adding that their PGS certification is now underway and they are just waiting for the implementing rules and regulations (IRR) to go out.

It has hampered the growth of organic sector not just in Negros but also in the entire country and around the world, he said.

“Just imagine, our customers from Bacolod City for example know already that we grow organic so why do we need a third-party certifier just to guarantee that we are doing organic and need to pay very high fees just to call our products organic,” Uy stressed, adding that the third-party system is more designed for export.

Under the new law, both third-party and PGS certification are allowed.

Uy said what is good about PGS is that organic farmers with consumers own the certification and it’s horizontal instead of vertical.

Farmers would still need the third-party accreditation late on if they export, Uy said.

“We don’t want it removed, it will be complementary to one another,” he said, adding that one benefit of having accreditation is enabling farmers to position their product in the market.

“You can use the organic label in your products in the country if you are PGS certified. You can position it well because organic is highly in demand,” Uy also said.