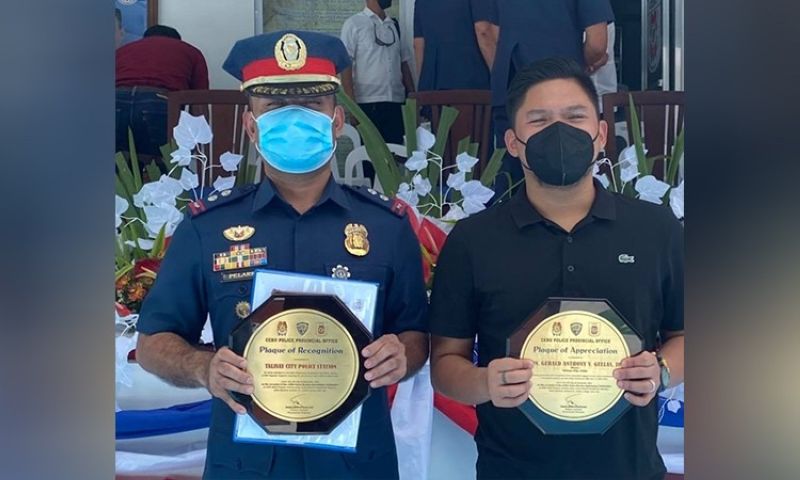 RECOGNIZED. Talisay City Mayor Gerald Anthony "Samsam" Gullas (2nd, from left) and his city's police chief, Lt. Col. Gerard Ace Pelare, present the awards they received from the Cebu Provincial Police Office (CPPO). The CPPO on Monday, Nov. 8, 2021, awarded Pelare and Gullas after their local police station was deemed the best in the entire province when it comes to their campaign against illegal drugs, illegal gambling, among others. (Mayor Samsam Gullas FB page)

The station was awarded during the CPPO's celebration of the Philippine National Police (PNP)'s 120th Police Service Anniversary.

Aside from the station, Lt. Col. Gerard Ace Pelare, their police chief, was also recognized by CPPO after he was chosen as one of the recipients of Metrobank Foundation's Outstanding Filipinos for the year 2021.

Talisay City Mayor Gerald Anthony "Samsam" Gullas Jr. also recognized by CPPO for his continuous support to his city's local police and their programs against anti-criminality.

In a statement posted on his FB page, Gullas said that the awards received by his city's local police is a testament to their seriousness in ridding criminality, including illegal drugs which have plagued some of their barangays for many years.

"Our anti-illegal drug war in Talisay, through Oplan Limpyo, has led to the significant improvement in peace and security and reduction in illegal drugs," Gullas said.

Gullas said that aside from the anti-criminality campaign waged by his city's local police, their community interaction in the city's 22 barangays was one factor behind their success.

"Community participation has also been an important factor in achieving our goals. I have never seen a partnership so strong, so strategic and so consistent as what we have established in Talisay in maintaining the peace," Gullas added. (JKV, PR)