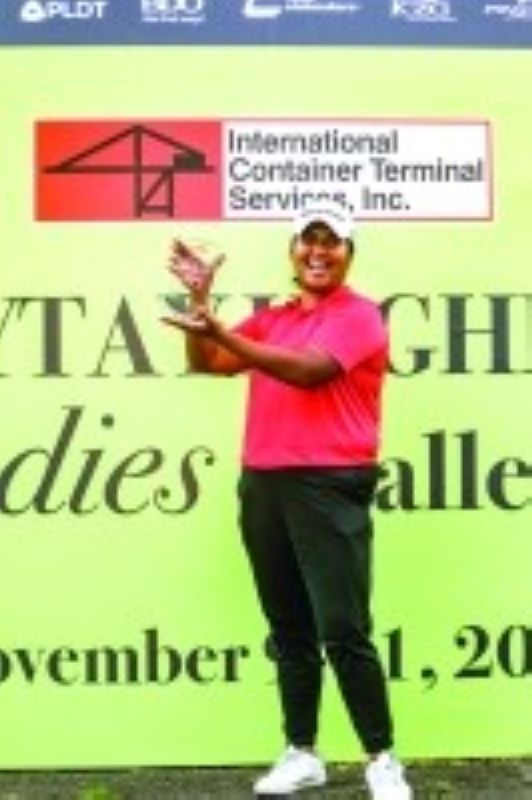 FLYING HIGH. Pilot Sunshine Baraquiel bags her first pro title with a victory over some of the country’s top players at the 2021 ICTSI Tagaytay Highlands Ladies Challenge on the Ladies Philippine Golf Tour on Wednesday, Nov. 11, 2021. / LPGT

SUNSHINE Baraquiel captured her very first pro title in style, winning the Tagaytay Highlands Ladies Challenge by three strokes over two of the country’s top players at one of the toughest courses on Wednesday, Nov. 11, 2021.

She bounced back from a sluggish start in the final round and then showcased the form that she flaunted late in the second round to stay in complete control, hitting clutch shots and putts on her way to a 72 and a spot in the elite circle of winners in only her fifth tournament on the Ladies Philippine Golf Tour.

“The tournament was mine to win, so I just hit the shots that I had to hit and made the putts that I had to make,” said Baraquiel, a lady pilot who never finished higher than seventh in her previous stints at Eagle Ridge’s Aoki, Sherwood, Eagle Ridge’s Norman and back at Aoki won by Harmie Constantino last week.

“Basically, I just breathed and slowed things down when I got nervous and my decision-making was on point — I made some crucial putts and made good pitch and chip shots,” added the 30-year-old shotmaker.

With an 11-over 221 total, Baraquiel bagged P101,250 in earnings, defeating Chihiro Ikeda and Daniella Uy, who pooled identical 224s after a pair of 73s, for the top honors at Highlands.

The margin of victory didn’t actually reflect the manner by which she and the rest of the field struggled trying to survive the harsh wind conditions at the up-and-down layout in all three days. The outcome remained unclear as they made the turn with Baraquiel, who grabbed a two-stroke lead over Ikeda and Uy in a wild second-round chase Wednesday, hanging tough despite a two-over 36 after a fierce frontside battle.

Ikeda threatened to within one with a 35 while Constantino closed to within two after a best 34 output in a tie with Uy and amateur Mafy Singson, who also carded 36s.

But Baraquiel, 30, proved steady at the back nine. While her rivals stumbled one after the other in their frantic attempt to hunt for birdies, the former Southwoods mainstay in various Interclub championships kept her mind clear and stayed focused, birdying the 10th for a two-stroke cushion then hitting another on No. 15 against two bogeys, including on the last hole that however hardly impeded her rise to the LPGT throne.

Ikeda fell farther back with three bogeys from No. 11, fought back with birdies on Nos. 14 and 15 but bogeyed the next for a 73, which Uy matched with her own version of a three-over closing card marked by two birdies but marred by five bogeys. They each received P63,750.

Constantino pressed her bid for back-to-back victories following her one-shot escape over Singson at Eagle Ridge’s Aoki last week with a two-birdie, two-bogey game after 12 holes. But she bogeyed two of the last five holes and wound up with a 72 in the second-to-last flight to end up fourth with a 15-over 225.

Singson, whose 76 in brutal conditions netted her the first-round lead but slipped to fourth with a second six-over card Wednesday, bounced back despite a 35 start. But she groped for a double-bogey and two bogeys in a birdie-less backside 40 for a 75.

She finished fifth with a 227 but claimed the low amateur honors for the second straight LPGT leg.