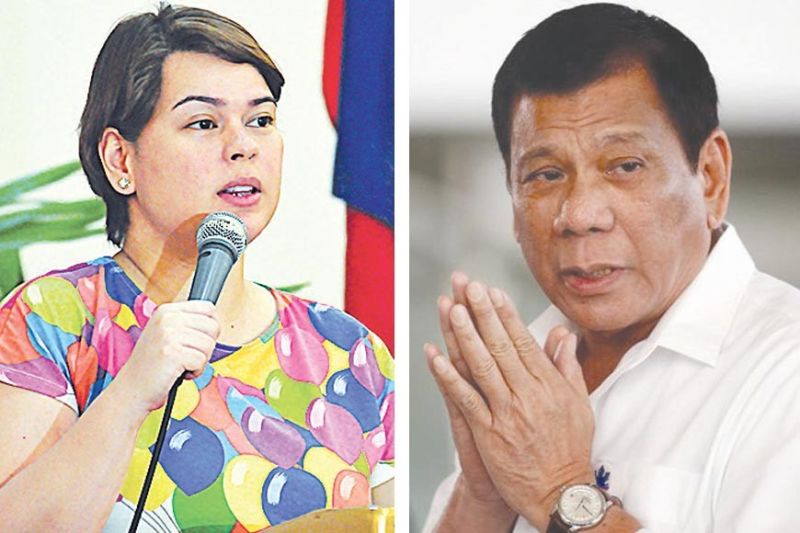 DAUGHTER VS. FATHER. After months of speculation, Davao City Mayor Sara Duterte-Carpio filed her certificate of candidacy (COC) for vice president on Saturday, November 13, 2021, or just a few days after she withdrew her reelection bid for city mayor. But in an unknown twist, Carpio’s father, President Rodrigo Duterte announced he would run for vice president too just after he accompanied his right hand man, Senator Christopher “Bong” Go, to file his COC for president on the same day. / SunStar file

DAVAO City Mayor Sara Duterte-Carpio and her father, President Rodrigo Duterte are heading towards a possible face-off in next year’s national elections.

This after close officials to the President announced that the elder Duterte is set to file his certificate of candidacy (COC) at the Commission on Elections (Comelec) office in Manila on Monday, November 15, 2021 just hours after his daughter filed her COC for vice president.

Carpio’s candidacy for vice president runs contrary to calls from some of her supporters to run for president.

Liloan, Cebu Mayor Christina Garcia-Frasco, who serves as Carpio’s spokesperson, confirmed the matter in a text message to SunStar Davao.

On Thursday, November 11, Carpio resigned from Hugpong ng Pagbabago, which she personally founded, before she took oath before Lakas-CMD.

Hours after Carpio filed her COC, her father and Senator Christopher Lawrence “Bong” Go arrived at the Comelec office in Manila to formally withdraw the senator’s COC as vice president which he had filed last month.

After withdrawing his COC, Go then filed his COC to run as president under the Pederalismo ng Dugong Dakilang Samahan.

As they were set to go home, Duterte suddenly blurted out before national media that he will serve as Go’s running mate.

Communication Secretary Martin Andanar told reporters that the President will return on Monday, November 15, to file his COC.

(On Monday, the President will go back here at Comelec office to file his candidacy for vice president.)

Just before the formal filing of candidacies in October, the elder Duterte had made pronouncements on his plans to run for vice president should his daughter refuse to do so.

Following his announcement, some sectors criticized the President, adding that he should make way for his successor rather than seek the country’s second highest post just to maintain a grip on power.

Go, Duterte’s trusted right-hand man, had earlier hinted that he would withdraw from running as vice president.

In Cebu, two aspiring candidates have withdrew their certificates of candidacies just two days before the November 15 deadline.