Dropping his VP bid, Bong Go runs for president in 2022 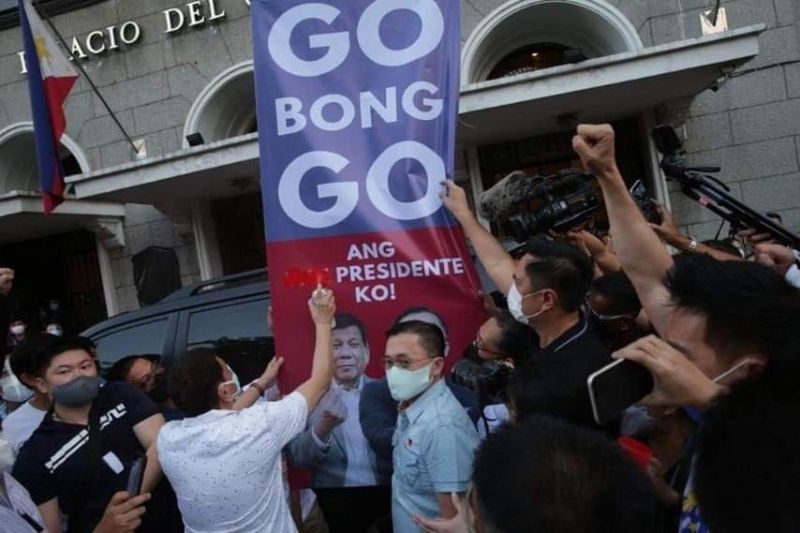 GO FOR PREXY. President Rodrigo Duterte spray paints the word 'vice' in the tarpaulin of Senator Christopher 'Bong' Go as the latter drops his bid for VP to run for president instead. (Contributed photo)

ANOTHER surprise move was made by Senator Christopher "Bong" Go as he filed his candidacy for president in next year's polls on Saturday, November 13, 2021, the second to the last day of the deadline for substitution of candidates.

Go, who came a few minutes before 5 p.m. Saturday, substituted Grepor Belgica as the standard-bearer of the Pederalismo ng Dugong Dakilang Samahan.

He was personally accompanied by President Rodrigo Duterte in the Commission on Elections main office in Intramuros, Manila.

The presidential aspirant explained that he strongly felt the need to step up to ensure the continuity of the reforms and vision of the Duterte Administration.

He vowed to serve as a bridge between the government and the Filipino people—particularly the poor, hopeless and helpless—to ensure their needs are provided for, their concerns addressed, and their voices heard.

Go’s most recent decision came after Davao City Mayor Sara Duterte filed her substitution papers for the vice presidency under the Lakas-CMD party.

The senator also promised to work hard to accomplish the President’s remaining plans for the benefit of the Filipino people after Duterte’s term ends, adding that he will build on the positive changes initiated by the Duterte Administration.

“The Filipino people should eventually be the winner in this election. While we head towards that, I have to consider the stand of my political party, led by President Duterte, which will both help us achieve our objectives,” Go believed.

He specifically reaffirmed his commitment to the President’s crusade against illegal drugs, crime and corruption.

He also pledged to push for the continuation of programs and projects that will bring about a more convenient, comfortable and prosperous life for all Filipinos.

The senator also expressed his heartfelt gratitude to his and the President's supporters, especially the supporters' confidence in their ability to give the Filipino people the hope and the future that they deserve.

In a separate statement, the Partido Demokratiko Pilipino–Lakas ng Bayan (PDP-Laban) leadership announced that Senator Bato dela Rosa withdrew his certificate of candidacy for President under PDP-Laban to give way to Senator Bong Go’s candidacy for president under the Pederalismo ng Dugong Dakilang Samahan (PDDS), which supported the candidacy of Go in 2019.

As explained by PDP-Laban, Go filed his candidacy under PDDS as the leadership issue in PDP-Laban has yet to be resolved by Comelec.

“Nevertheless, PDP-Laban and PDDS are united in carrying one team for both our national and local candidates,” the statement said.

“The Alliance of PDP-Laban and PDDS is strong and will work tirelessly to push for continuity of President Rodrigo Duterte’s brand of leadership, which includes a tough stance against criminals, grafters, drug lords and terrorists, on the one hand, and a genuine concern for the masses, on the other,” it added.

According to the PDP-Laban statement, the PDP-PDDS Alliance has chosen Go as its candidate for President because the senator carries with him a wealth of experience acquired from years of mentorship under President Duterte and is best suited to ensure continuity of President Duterte’s “Tapang at Malasakit” brand of leadership.

The alliance has also said that Go is endeared by the “Pangkaraniwang Pinoy” because of his own brand of Malasakit, which caters to the poorest of the poor. Go is also expected to continue President Duterte’s “Build Build Build” program—including mass railways projects, airports and seaports, and other infrastructure projects, all ensuring convenience of mobility to the masses.

The statement also said Go is the most hardworking among all the candidates for President and lives up to his motto, “Ang BISYO ay MagSERBISYO.”