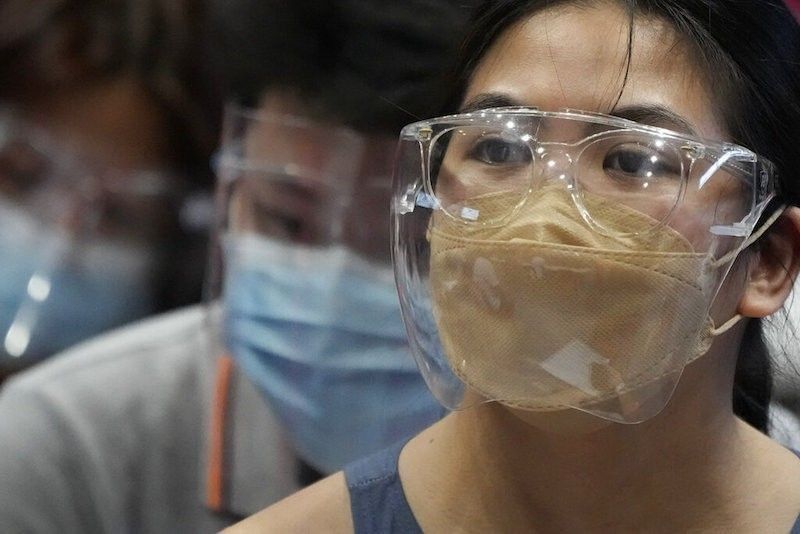 MANILA. Residents wearing protective mask and face shields to prevent the spread of the coronavirus waits for their turn at a sporting arena converted into a temporary Covid-19 vaccination center in San Juan City on June 17, 2021. (AP)

Local government units (LGUs) and private establishments in areas under Alert Level 4, however, were given the discretion to mandate the use of face shield as added protection against the coronavirus disease (Covid-19).

Alert Level 4 will be implemented in Catanduanes province starting Wednesday, November 17, until November 30.

A memorandum signed by Executive Secretary Salvador Medialdea on Monday also stated that for areas under Alert Level 5 and granular lockdowns, "the use of face shield in community settings shall be mandatory."

Medialdea said in the memorandum that the above protocols "are without prejudice to the continuing mandatory use of face shields in medical and quarantine facility settings, and the required use thereof by healthcare workers in healthcare settings."

Presidential Spokesperson Harry Roque announced Monday morning that Baguio City and Siquijor will be placed under Alert Level 3 from November 15 to 30.

Also under Level 3 are Batanes, Quirino, Nueva Vizcaya, City of Isabela and Zamboanga City from November 17 to 30.