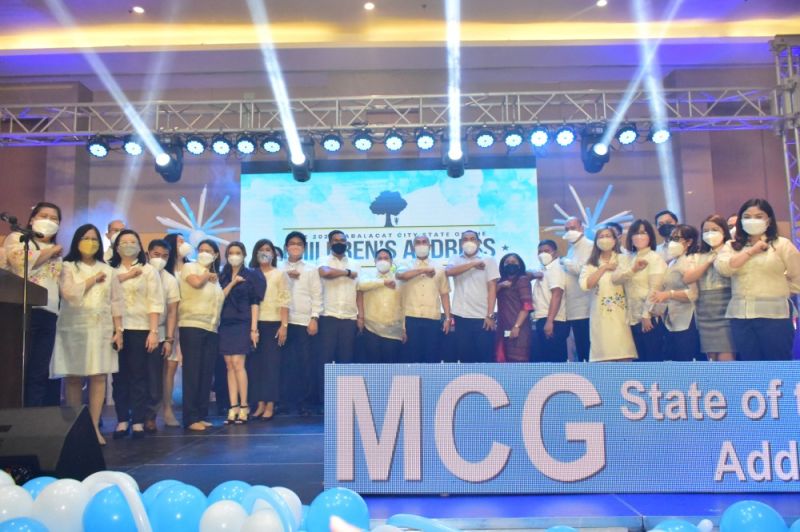 PAMPANGA. Mabalacat City Mayor Crisostomo Garbo is joined by Vice Mayor Gerald Aquino, the members of Sangguniang Panlungsod, city department heads, and stakeholders shortly after his State of the Children’s Address held November 17, 2021 at the Royce Hotel and Casino. Garbo highlighted all the achievements and successful services of his administration that propelled Mabalacat City to be one of the child-friendliest LGUs in the country. (Contributed photo)

THE local government of Mabalacat City under the leadership of Mayor Crisostomo Garbo has underscored the successful implementation of various child-centered programs and services in anticipation of a better normal for every Mabalaqueño youth.

In his 2021 State of the Children’s Address (SOCA) held on November 17, 2021 at Royce Conference Hall in Clark Freeport, Garbo said that the Mabalacat City Government has expanded its child support mechanisms by mobilizing all concerned city government offices despite the insurmountable impacts of the pandemic.

The local chief executive highlighted the commencement of the city’s comprehensive Pediatric Vaccination Program where the City tapped various public and private schools to ease the implementation of the vaccination drive. He added, “we were able to provide pandemic services to the children’s sector with 2,657 individuals investigated, quarantined, tested, isolated, and treated.”

Garbo also said that the local government has been getting the attention of the national government for its efficient and effective Covid-19 response and vaccination in Central Luzon.

Meanwhile, the mayor placed high importance on early childhood care manifested by the institutionalization of the Early Childhood Care and Development Office, its structures, mechanisms, and services all aimed for the holistic development of children at the early stage.

One of its flagship services is the implementation of Center-Based Program Implementation in Alternative Venues or CBPAV, a program aimed to assist children and parent-mentors in home-based learning while Child Development Centers remain closed.

Another is the continued operation of the Mabalacat City Drop-In Center for Women and Children (MCDIC) or the “purple house” which currently houses 22 individuals classified as children at risk, children in need of special protection, or children in conflict with the law.

“Amid the pandemic, the facility [MCDIC] has continuously provided a sundry of support services, temporary shelter, educational and livelihood opportunities to individuals, particularly those whose security and safety was compromised due to certain circumstances,” Garbo said.

Among other notable accomplishments of the Garbo administration mentioned in the public address are the implementation of the “Adopt a Family”, NutriPack, and Tutok Kainan program providing food sustenance to thousands of families and children; the enactment of DepEd’s Child Protection Policy in all schools in the city; and the continuous provision of basic health and social services to children in the grassroots level.

The city has also fulfilled the Pagsasarili Family Care Center Program with six facilities groomed to pilot a sundry of educational and social services in partnership with Clark Development Corporation (CDC) and OB Montessori Foundation. Garbo said that all facilities will “provide utility, housing, and other social services, including learning opportunities and livelihood programs all aimed to uplift the lives of our brothers and sisters in the indigenous communities”.

Garbo also disclosed that the city government garnered a satisfactory 80 percent rating as an outcome of the Child-Friendly Local Governance Audit held in March 2020. Moreover, Mabalacat City was also chosen by the National Council for the Welfare of Children as one of the pilot LGUs on the localization of the Philippine Plan of Action to End Violence Against Children.

“We have accomplished all of these while we are in the midst of a global health crisis. Tuluy-tuloy po tayo sa ating daan patungo sa “Bayung Mabalacat”, kung saan lahat ay kasama at walang maiiwan,” the mayor said.

Garbo’s SOCA was delivered before the members of the Sangguniang Panlungsod headed by Vice Mayor Gerald Aquino, city government department heads and employees, officials from the barangay, and the general public via Mabalacat City News Facebook premiere. (PR)