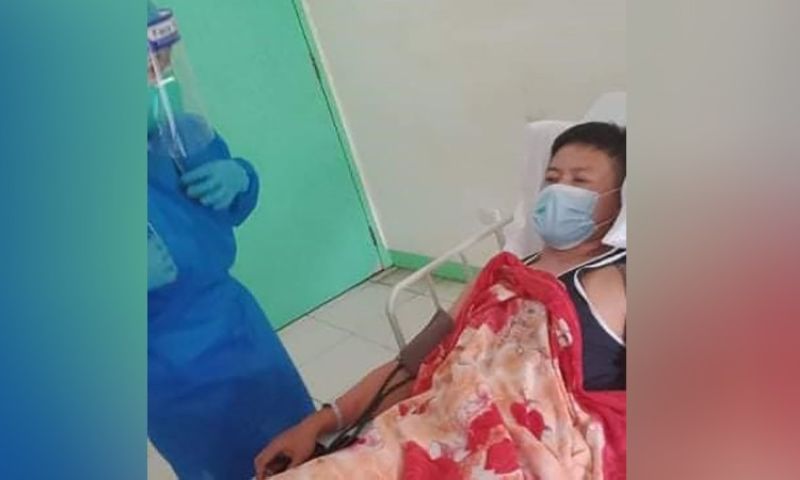 Photo courtesy of A Plight for Life

A family man with three children ages 11, 4, and 2, Abayare has been in the public service under the Leyte Police Provincial Office (LPPO) for eight years now.

His fellow police officers in Class Kalasag 2013-02 described him as a deeply religious person.

“As much as possible, he never misses mass on Sundays,” according to his family and colleagues, who launched the Facebook blog A Plight for Life, which was created to pool their efforts for Abayare’s medical needs.

A health-conscious and athletic person, Abayare has not smoked in his entire life.

“He is living an ordinary life, serving the country as one of the brave men of Philippine National Police in Eastern Visayas...He was living the life that he dreamt and worked hard for until last July 26, 2021, when he suddenly collapsed and had a seizure early morning while on duty,” the blog reads.

After he was brought to a hospital, a series of laboratory tests -- such as cranial MRI, CT scan, biopsy, and blood works -- showed that Abayare has lung cancer.

“It was a devastating time for our family and caused him depression. We all couldn't believe and accept that this is happening to him,” his family wrote.

“Despite this situation, his faith remained firm that God would never forsake him. He continues to fight and believe that he can defeat this deadly disease,” the family added.

After Abayare’s targeted two-month treatment and another MRI and CT scan, they found out that his lung and brain tumors multiplied in number and size.

“He suffered terrible headaches and vomiting, and no pain killer worked anymore,” the family said.

His neurologist said that he has to be admitted to help him manage pain.

After three weeks in the hospital, Abayare underwent brain surgery to remove the biggest tumor that blocked the vein where oxygen and water in the brain pass through.

“We praise God for His grace and mercy that Jethro survived the operation without any bad side effects. He is now recovering at home while waiting for his next series of treatments,” his family said.

“Since this treatment is not available here in Tacloban, he needs to go to Cebu or Manila. Hopefully, we will be able to sustain his treatment through fundraising,” wrote Abayare’s family.

“We would like to knock on your kind hearts to please help and support Jethro's plight to survive this cancer and give him a chance to have more years to serve his family, the society, and God,” they said.