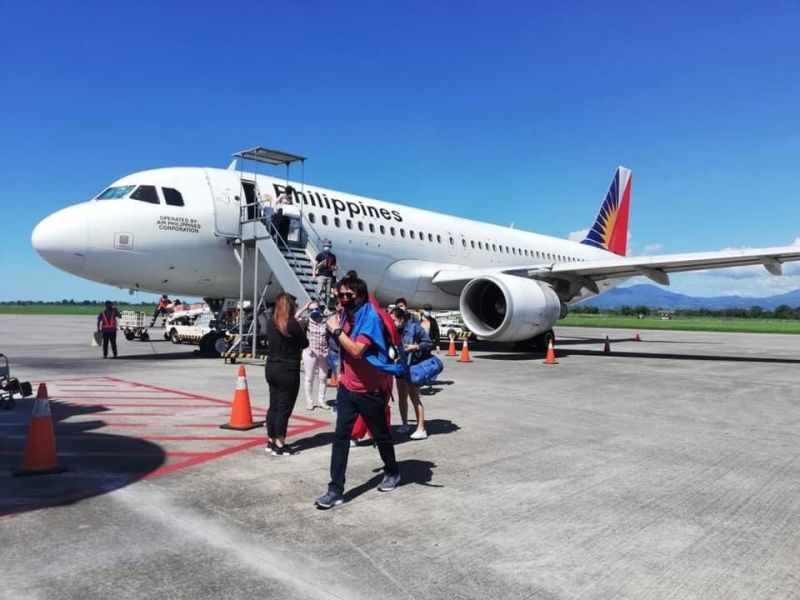 BACOLOD. Passengers are still required to present S-Pass when travelling to Bacolod City by air, according to Provincial Administrator Rayfrando Diaz II despite the Executive Order issued by Mayor Evelio Leonardia stating that it's no longer a requirement. (File Photo)

SHOULD Safe, Swift and Smart Passage (S-Pass) be required from fully vaccinated travelers bound for Bacolod City and Negros Occidental, or not?

For Bacolod City, Councilor Cindy Rojas, chairman of Action Team on Non-Overseas Filipino Workers Returning Residents, has urged airline companies not to require S-Pass from their passengers who are already fully vaccinated.

Citing Executive Order (EO) 53 issued by Mayor Evelio Leonardia, Rojas said it allows travel into Bacolod without the need for an S-Pass since the city was placed under Alert Level 2 in terms of coronavirus (Covid-19) transmission from November 15 to 30.

The mayor's EO only requires travelers either through air, land or sea to present their vaccination cards if they are fully vaccinated.

But for Negros Occidental Provincial Administrator Rayfrando Diaz II, not requiring S-Pass for travelers bound for Bacolod City is illegal.

Diaz said it is a violation of Resolution 101 of the Inter-Agency Task Force (IATF).

Under the resolution, the S-Pass is the mode wherein travelers are able to upload all of their documentation for proper recording like the vaccination cards and negative reverse transcription polymerase chain reaction (RT-PCR) tests.

"I don't think the EO is legal and the Department of the Interior and Local Government (DILG) should check it," Diaz said, adding that, it is not yet advisable to lift the S-Pass requirement among travelers since the city and province's current alert levels are only temporary and that it changes every two weeks.

The City Government of Bacolod, in a statement said, it is at a loss over what appears to be a "power play and under-handed tactic" employed by Diaz, who requires the mandatory presentation of S-Pass by Bacolod-bound passengers traveling via the Bacolod-Silay International Airport in Silay City.

It said that many returning Bacolodnons and Bacolod-bound passengers cried foul at the Ninoy Aquino International Airport in Metro Manila after airlines disallowed them from boarding their supposed flight, saying they are just complying with the policy of the Provincial Government.

But Diaz said that under the IATF resolution, if travelers are expected to commute among the local government units (LGUs), they cannot disregard the protocols of the LGUs they are passing through.

That means that even if travelers are bound for Bacolod City arriving at the Bacolod-Silay Airport, they will still be required to submit their documents via the S-Pass system as the airport is under the jurisdiction of the Provincial Government of Negros Occidental, he said.

Diaz added that when they checked the S-Pass, Bacolod travel policy was still listed as "restricted."

Bacolod City should not let their guard down, Diaz said, noting that countries in Europe such as Germany are closing down again as they brace for the fourth and fifth wave of Covid-19 pandemic triggered by the Delta variant.

The official said that if the City Government does not want to take care of its S-Pass approval and throw caution into the air, then Negros Occidental is willing to process all the S-Pass applications without delay, but without sacrificing the province's minimum health requirements.

Diaz maintained that they will still require such a requirement for Bacolod City-bound travelers who are entering the province.

Apparently irked by the non-agreement of the Provincial Government and Bacolod City on the S-Pass requirement, Rojas apologized for the inconvenience it has caused to passengers and appealed to the airline companies to honor the EO of the mayor.

"Please bear with the inconvenience because somebody is not listening to reason. For the meantime, all travelers taking air travel, my office is still receiving and approving S-Pass applications prior to your trips," she said.

In a related development, Emergency Operations Center (EOC) Executive Director Em Ang said Diaz's move is a clear disrespect of the EO issued by Leonardia on November 14 after the IATF downgraded Bacolod's alert status from Alert Level 4 to Alert Level 2 since Covid-19 cases here had been on a steady decline.

EO 53 also no longer requires an S-Pass for fully-vaccinated city-bound passengers traveling by air, land or sea if their final destination is Bacolod.

Ang, speaking on behalf of Leonardia, dismissed claims made by Diaz that requiring S-Pass is illegal.

"Our EO 53 would not have been concurred by Regional IATF chief and Regional Director Jovian Ingeniero if it were not in conformity with the NIATF policy," Ang pointed out.

Leonardia's EO 53, she further reiterated, was issued in conformity and compliance with the Guidelines on the Implementation of Alert Levels System for Covid-19 Response in Pilot Areas as of October 13, 2021 issued by the IATF.

"Our EO 53 would not have been concurred by Regional Inter Agency Task Force (IATF) chief and Regional Director Jovian Ingeniero if it were not in conformity with the of the national IATF policy," Ang said.

The requirement of the S-Pass in the interzonal and intrazonal travel is not covered in the guidelines, she pointed out.

She lamented that Diaz apparently forgot the autonomy of Bacolod as a highly-urbanized city yet "he treats us like we are a component city of the province and well within his political jurisdiction."

The City Government, in the same statement, said that some netizens took to social media, saying: "Diaz is not only confusing Bacolodnons but is hurting a lot of families who had been longing to see their relatives come home."

It also claimed that a businessman who requested anonymity said that such a move by Diaz may be tantamount to economic sabotage, bullying or harassment.

A netizen, Ces Jo, also posted on her Facebook account the experience encountered by her Bacolod-bound aunt who was held by Cebu Pacific for failure to present an S-Pass and missed her flight, prompting her to rebook her travel.

Clearly, Ang said, that there are people who are inconvenienced.

For the meantime, fully vaccinated passengers against Covid-19 are not required to present S-Pass when travelling to Bacolod by sea and should only need to present their vaccination card.

Only non-fully vaccinated or unvaccinated individuals are required to present a negative RT-PCR test result obtained within 72 hours prior to arrival in Bacolod City.