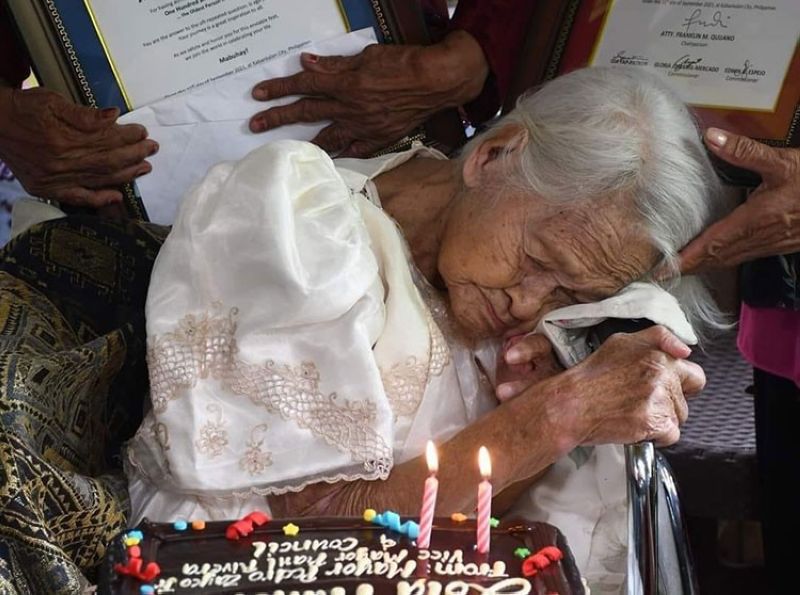 THE Provincial Government of Negros Occidental is mourning the death of supercentenarian Francisca Susano, its top official said.

Extending condolences to the bereaved family, Governor Eugenio Jose Lacson said: "I hope that she will enter the kingdom of God as soon as possible."

Fondly called by the many as “Lola Isca,” Susano celebrated her 124th birthday last September 11.

She was the oldest living Filipino, and probably the world’s oldest as well.

The Kabankalan City native is also believed to be older than the current title holder, Kane Tanaka of Japan, who is 117 years old.

But there is no official declaration yet from the Guinness Book of World Records declaring her as the oldest living person in the world, as it still needs more evidence.

A family member confirmed to SunStar Bacolod his passing on Monday, November 22.

Jonathan Susano, one of her great grandsons, said Lola Isca died at their house in Barangay Camingawan around 6:45 p.m.

“Wala siyang sakit. Pero may sugat siya sa kanyang tagiliran dala siguro ng matagal na pagkakahiga [She has no illnesses. But, she has a wound on the side of her body maybe because of lying on the bed for a long time],” he said.

The local health office has yet to determine the cause of her death.

The City Government of Kabankalan, in its official Facebook Page, also announced the passing of Susano.

“It is with sadness in our heart when we received the news that our beloved Lola Francisca Susano passed away early this Monday evening,” it said, adding that “her official declaration as the oldest person in the world at 124 years old is currently validated by the Guinness Book of World Records.”

The city officials, led by Mayor Pedro Zayco Jr. and Vice Mayor Raul Rivera, said the entire Kabankalanons condole and pray with the family of Susano in their period of bereavement.

“Lola Isca will always remain as our inspiration and pride,” they added.

Born in 1897, before the Philippine Independence Day, Susano had witnessed two world wars.

In fact, one of her 14 children is already a centenarian at the age of 101. She has over 400 grandchildren.

Her secret to a longer life is eating vegetables. Playing harmonica also gave her happiness.

During her last birthday, surprises from different groups greeted the Negrense supercentenarian.

Commissioner Franklin Quijano, of the National Commission of Senior Citizens, presented the gifts for Susano at their other house in Barangay Oringao.

The presents included a bouquet of flowers, plaque of recognition, P10,000 in cash, and a manager's check worth P24,000.

"This Certificate of Recognition is given to Francisca Montes Susano for having achieved the healthy and productive age of 124 [and being] the oldest living person in the world," the plaque reads.

The city officials gave a cake, medical supplies, vitamins and groceries to Susano.

The birthday celebrant also received a wheelchair from the Provincial Health Office of Negros Occidental.

This is on top of another wheelchair, vitamins, face shields, dusters and blankets given by a team from the Department of Health.

Commissioner Jorge Largado of the National Commission on Indigenous Peoples (NCIP) also personally greeted Susano, who is a member of an IP community in the village.

The birthday treats for "Lola Isca" continued to pour as members of the Kabankalan City Police Station personnel and 604th Regional Mobile Force Battalion (RMFB)-Western Visayas also prepared a surprise for her.

Bringing with them a tarpaulin and a cake, they sang a happy birthday song for Susano while approaching her at their house's balcony.

"Truly, she is really a thriving national treasure," the police station also said.