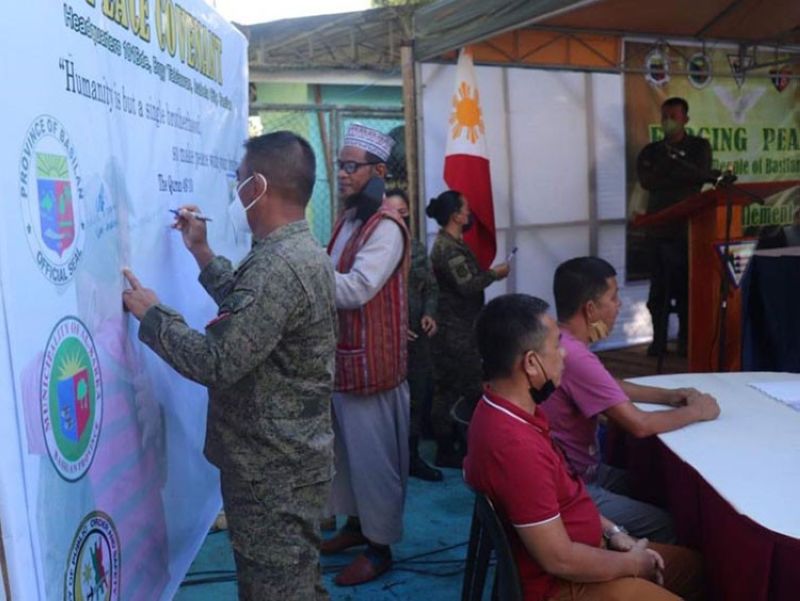 TWO opposing political camps from one of the towns in Basilan province have signed a peace covenant ending their three-month-old dispute.

Gobway, who initiated the peace covenant signing, said Lajid and Jakilan pledged to sustain the peace and improve their relationship for the common good.

"The two political leaders promise to work for a clean, honest, and peaceful 2022 national and local elections," he said.

The dispute between the camps of Lajid and Jakilan was caused by political disagreement.

Two people-one from Lajid's camp and the other from Jakilan-were killed when the followers of the two politicians clashed on August 3 in the town of Al-Barka.

Gobway has deployed forces to ease the tension and to help the police maintain law and order in Al-Barka town and initiated talks that resulted in the peace covenant signing Sunday, November 21, 2021.

"The event exemplifies the importance of communication and good public service. I commend the officials of Al-Barka for setting aside their differences and putting their utmost interest to the safety and security of their constituents," said Major General Alfredo Rosario Jr., commander of Western Mindanao Command (Westmincom).

"May they be an inspiration to all those who vie for government posts," he added. (SunStar Zamboanga)