Groups push for repowering Negros, PH with RE to benefit consumers, laborers 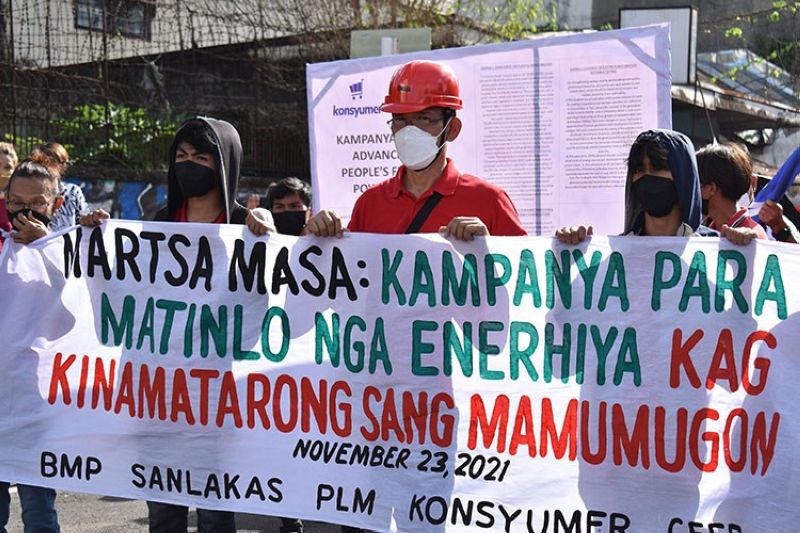 NEGROS. Labor leader Leody de Guzman, a presidential aspirant, leads the call for energy reform as well as labor and consumer rights during the "Martsa Masa" in Bacolod City on November 24, 2021. (Konsumer-Negros Photo)

HUNDREDS of clean energy advocates and representatives of labor, youth and consumer groups marched together on Wednesday, November 24, to decry current policies and systems in the power sector that promote destructive and costly energy while failing to protect the interests of consumers and ordinary Filipinos.

Dubbed "Martsa Masa," the activity bannered the groups' call for a cleaner energy.

The march also called for the advance of workers' rights, which the groups said will be assisted by a swift and just transition to clean energy and people-centered reforms in the power sector.

Presidential aspirant and BMP chairman Leody De Guzman, who led the activity, said that because of coronavirus disease (Covid-19), workers across Negros and the Philippines today are heavily burdened not only by limited or lost livelihood, but also increasing costs of basic necessities.

"As we seek to move forward from this crisis towards a new normal where workers and ordinary Filipinos are far more empowered, part and parcel of our recovery plans should be tapping renewable energy sources that can create much needed green jobs and supply affordable and reliable electricity in the long-term," he added in a statement.

For the groups, it is high time to scrutinize how the Electric Power Industry Reform Act (Epira) shaped the power sector, and put forward energy development directions that will empower end-users while advancing sustainability and affordability of electricity.

Konsyumer Negros Coordinator Griderick Alila, in a statement, said two decades of Epira brought the people nowhere near its promise of healthy competition among private players and least-cost electricity for consumers.

"Instead, we find ourselves struggling to pay bills while having little to no say in processes that determine the kind and cost of electricity we get, which today is increasingly expensive and largely taken from dirty energy sources like coal and gas that cause suffering to communities while also destroying the climate and environment," Alila said.

He added, "We will not stand idly by when we know far better alternatives in the form of renewables can be made available to us."

The march was followed by a People's Power Assembly, which featured the launch of a five-point agenda on democratizing the energy and power industry; the need to overhaul Epira; taking action for climate and displacing fossil fuels; transitioning to renewables for a green recovery and a more sustainable future; and ensuring access to affordable electricity for all.

The agenda stated that there is a need to bring down electricity rates in order to make it affordable and accessible.

There must be awareness that for electricity access to be affordable and reliable in the long term, renewable energy must be established as the primary source of electricity across the country, it said.

"In this regard, a clear goal that we advocates of energy democracy and people-centered development must unite in is to raise the national ambition for renewable energy development to at least 50 percent by 2030, the agenda, whose content, according to the group, must be prioritized by the government and all aspiring for positions in public office ahead and beyond the upcoming elections, further stated.