A trail of firsts in SunStar’s journey to 39 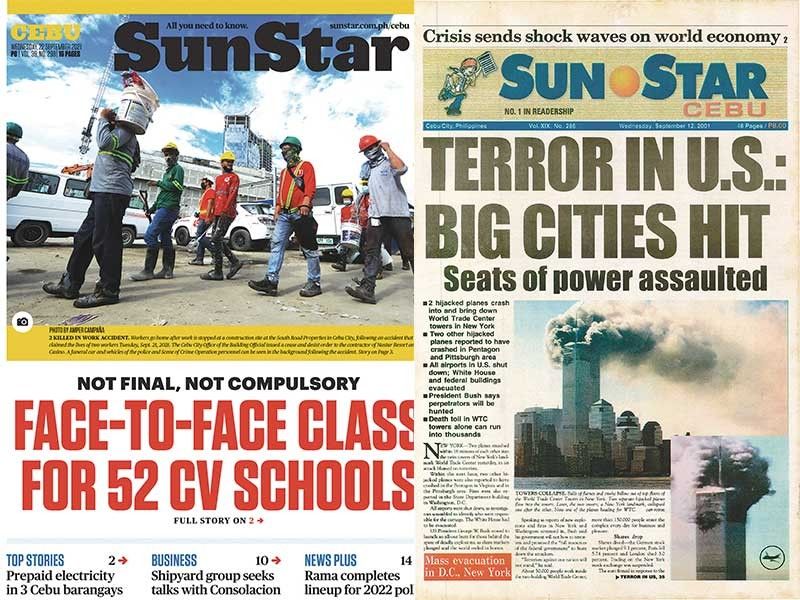 IF SUNSTAR Cebu were a woman, 39 years old might sound over the hill.

And so today, at 39, SunStar begins a new chapter with all the fire and moxie of its generations of scribes past and present propelling it to a future unknown yet exciting.

Who said unknown territory was alien to SunStar anyway? This paper’s journey to 2021 and multi-hyphenate information enterprise breaking the digital barrier was seeded by the many firsts in its storied odyssey.

1. First in Hall of Fame

It was the first community paper to be elevated to two Halls of Fame after being the first to achieve two three-peats: Cebu Archdiocesan Mass Media Awards Hall of Fame in 1994 for being a three-time awardee as “Best Newspaper” (1991, 1992, 1993), and “Philippine Community Newspapers’ Hall of Fame” by the Asia Media Project Konrad Adenauer Foundation and Philippine Press Institute for being the “Best Edited Daily” for three years (1997, 1998, 1999). As of October 2021, SunStar Cebu has reaped 307 awards from national and local award-giving bodies.

The newspaper was born on Nov. 25, 1982 as SunStar Daily with the aim of serving the Cebuano people as a community paper. It changed its name to SunStar Cebu in 2000, five years after the launch of its network of community newspapers nationwide that spurred the need to have its area of operation reflected in its name.

Its first business and editorial offices were at Door 14, Borromeo Arcade, F. Ramos St., Cebu City. But editor-in-chief Pachico Seares would move the team to a second home just a year later on Osmeña Blvd. to secure a larger area for its printing equipment. The paper moved to its third and current home, its own building at the corner of P. del Rosario and Don Pedro Cui Sts. in 1994, from where it first reached out to the globe.

Through joint venture agreements with other regional papers in growth centers throughout the country, SunStar Publications Network was born in 1995. The pioneering effort grouped 11 dailies, seven weeklies and three magazines with Cebu’s SunStar Daily as the flagship. This brought the SunStar brand to key cities like Cagayan de Oro, Davao, Zamboanga, Pampanga, Pangasinan, Iloilo, Bacolod and Baguio, among others.

To complement its daily English-language offering, SunStar Daily spawned the first Visayan daily tabloid, SunStar Superbalita, in 1994, as well as the first annual publication devoted entirely to Cebu, The Cebu Yearbook, in 2001. Superbalita in turn spawned other Visayan tabloids in similar mold in Cagayan de Oro and Davao, while The Cebu Yearbook, the coffetable book of essays and features exploring the trends of Cebu, has become the ultimate journal on Cebu’s business, governance and culture.

7. First to be included in global collection of headlines

In 2001, SunStar Cebu became the first and only paper in Southeast Asia to be featured in the book “September 11, 2001,” a collection of newspaper headlines from all over the world. Page 138 shows Page 1 of SunStar Cebu’s September 12, 2001 special edition, one of the dailies selected by the Florida-based The Poynter Institute. In 2005, SunStar’s front page about the demise of Pope John Paul II, “A Lesson in Dying,” also landed in Poynter Institute’s book on newspaper headlines about the Pope’s death.

In 2013, it became the country’s first community paper to regularly use remotely piloted aircraft, or drones, in its photo and video journalism. And it all began when then SunStar Publishing Inc. president Julius “Jayjay” Neri Jr. used a drone and a phone to produce images and video of the Sinulog seaborne procession, allowing the public to see the annual procession from a new angle.

In January 2009, SunStar was the first in Cebu to broadcast live via the Internet, through sunstar.com.ph, the Sinulog grand parade from the grandstand of the Cebu City Sports Center. This started the livestreaming innovations of SunStar in bringing major news events about Cebu to the world.

On July 5, 2013, a test broadcast named “SunStar webcast” was first aired on www.sunstar.com.ph. It was formally launched on Nov. 5, 2013 as “SunStar Pilipinas,” covering reports from communities in Luzon, Visayas and Mindanao. The webcast, the first among media companies in Cebu, ran for 30 minutes at noon Monday to Friday. Today, the webcast has evolved into a news and current affairs program called “Newsbits” aired live over Facebook at 7 p.m. Monday to Friday.