Labella back at City Hall for last time; CCTO warns of traffic during funeral 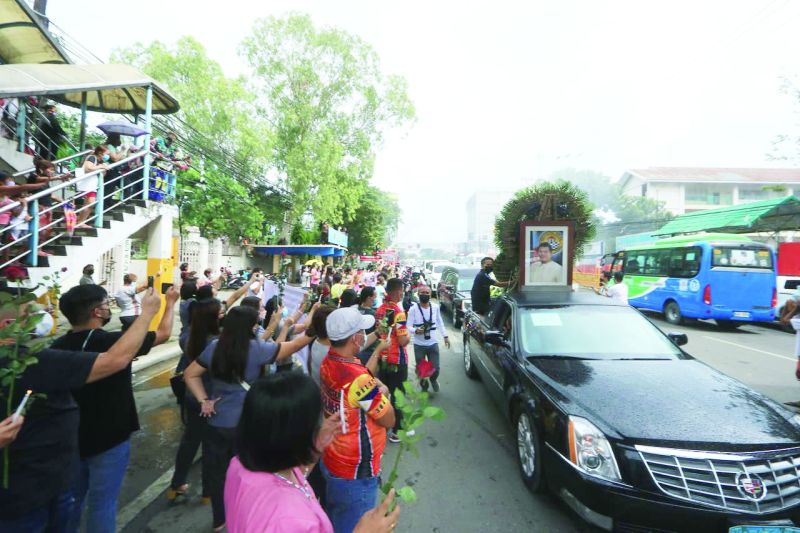 BIDDING FAREWELL. People lining a street in Barangay Mabolo, where the late Cebu City mayor Edgardo Labella resided, hold out flowers as the hearse carrying his body passes in front of the St. Joseph the Patriarch Parish Church in Cebu City Wednesday, Nov. 24, 2021. Labella's remains were transferred from Crystal Palace in Barangay Lahug to City Hall Wednesday, where they will stay for two days. Labella died last Nov. 19 from a lingering illness seven months before his three-year term as mayor would have ended. / AMPER CAMPAÑA

MAYOR Edgardo Labella, 70, returned to Cebu City Hall for the last time Wednesday, Nov. 24, 2021, but no longer as chief executive after his passing last Nov. 19 due to septic shock secondary to pneumonia.

His body was transferred from Crystal Palace in Barangay Lahug to City Hall to give the ordinary Cebuanos from the city’s 80 barangays who had put him in City Hall’s highest position, the chance to see him for the last time before the mayor’s burial at the Golden Haven Memorial Park in Barangay Binaliw on Nov. 26.

The public viewing which began on Wednesday afternoon will run until Friday noon as at 1 p.m. of the same day the last mass will be held at the Cebu Metropolitan Cathedral before the mayor is finally laid to rest.

Edgardo “Jaypee” Labella II, Labella’s eldest son, thanked the Cebuanos for their warm support, shown especially by people lining the streets during the transfer of the mayor’s body to City Hall.

Jaypee is running for councilor in the north district in the 2022 elections.

The younger Labella said their family was deeply saddened by the passing of their father but that their pain was assuaged by the sharing of their grief by the Cebuanos.

Jaypee urged Cebuanos not to be complacent and to still follow health protocols when they pay their respects to his father as coronavirus disease (Covid-19) is still around even if the number of new cases in the city has gone down.

Lyntoni Alburo, head of the Cebu City Transportation Office, apologized and sought the understanding of the Cebuanos who will be affected by the traffic jam expected to occur this Friday afternoon during Labella’s funeral.

Traffic congestion is expected on M.J. Cuenco Avenue going to Barangay Mabolo, turning to Pope John Paul II St. and then along the Banilad Talamban road until reaching Binaliw.

Before becoming mayor, Labella was Ombudsman Director of the Visayas in 1994-1998 and became a councilor of Cebu City in 1998, during which he was saved from drowning after floating in the sea for 36 hours following the sinking of the mv Princess of the Orient as it sailed from Manila to Cebu in the middle of a storm.

Labella was vice mayor from 2013 to 2019 and became mayor in 2019 when he defeated reelectionist mayor Tomas Osmeña.

His vice mayor, Michael Rama, took his oath of office as mayor the day after Labella’s death.