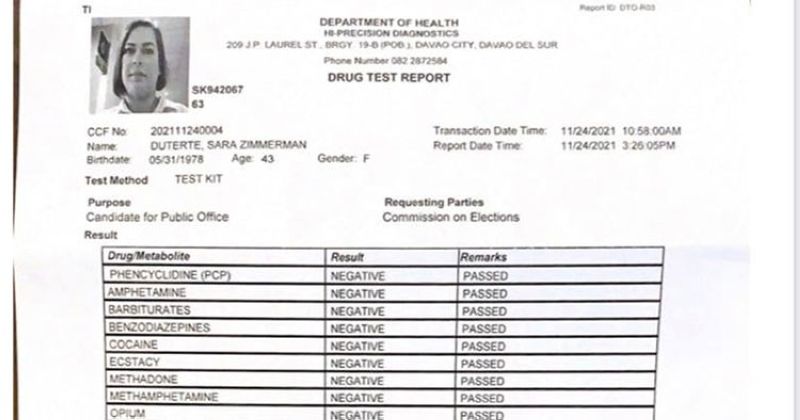 Duterte-Carpio confirmed this in a statement on Wednesday evening, November 24, along with the photocopied drug test report provided by her camp.

"Today [November 24], I took a drug test that yielded negative of any illegal substances. This test, I took voluntarily upon the request of my Uniteam partner, Senator Bongbong Marcos, to support the call for transparency as aspiring public officials seeking the trust of our fellow Filipinos," she said.

Marcos submitted to law enforcement agencies earlier this week a negative drug test result amid claims of President Rodrigo Duterte that one presidential aspirant in the 2022 elections was using cocaine.

"This can be seen from both our negative tests as well as our common stance against the proliferation of illegal drugs and the need for effective measures of prevention, rehabilitation, and enforcement," Duterte-Carpio said.

As important as the war against illegal drugs, the mayor added that other compelling issues continue to challenge the "country’s ability to provide long-term safety and security for our people."

"Therefore, it is crucial in this electoral season that we focus on the substantial qualifications of those that seek to lead our country," Duterte-Carpio said.

"Particularly, that we examine our Presidential and Vice Presidential candidates under the lens of competence and experience -- an infallible ability to manage crisis through policy and practice built up through years of executive, legislative, and administrative exposure; a proven track record of delivering security and development; and a clear and tested platform for job security and sustainable livelihood," she added.

Meanwhile, the President also called on political aspirants to undergo drug testing despite it not being a requirement in seeking a public post.

"I'm calling again all elective aspirants to take the drug test to ensure our people, particularly the young generation, that no elected leader is into illegal substances," he said.

The tandem submitted themselves to voluntary drug testing Thursday, November 25, at the PDEA in response to President Rodrigo Duterte’s claim that a presidential aspirant in the 2022 elections was using cocaine.

In an interview Thursday, Moreno said their voluntary submission to drug testing is their way of proving to the public that they are not using illegal drugs and are supporting Duterte’s war on drugs.

He stressed that PDEA is the proper agency to conduct the drug test.

“What is important there is a right, proper and effective agencies fighting against drugs. There is a scientific way of finding out whether a person is a user or not. If you submit yourself to PDEA, ito yung tama,” he added.