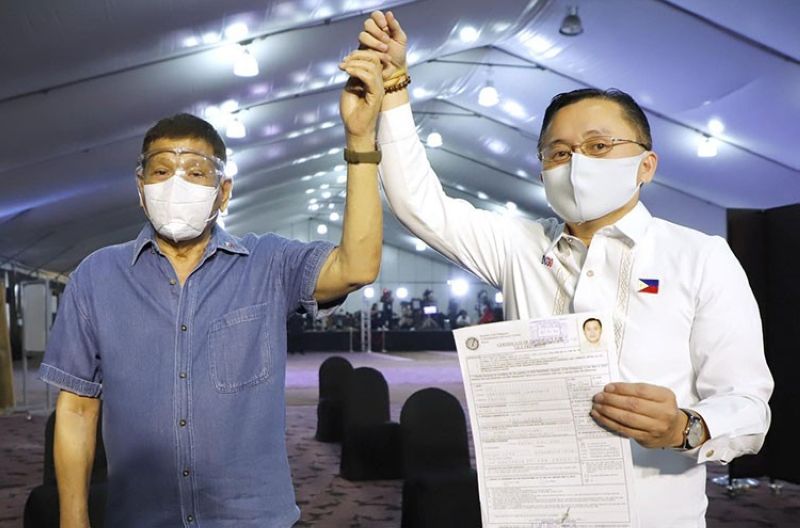 IN A seemingly cryptic statement, Senator Christopher "Bong" Go may have hinted that he has been struggling or having doubts with the decision to run for presidency.

“But in the past few days po, I realized that my heart and mind are contradicting my own actions,” he said in a statement on Thursday, November 25.

The senator admitted that he never “dreamed of” becoming the president.

“Running for the Presidency is something I have never dreamed of. Iniiwasan ko ang posisyon na ito (I was trying to avoid running for this position), but fate -- as I said -- has a way of turning things around. Nagdesisyon ang partido at si Pangulong Duterte (The party of President Duterte decided that I will be their president) and I accepted the challenge,” Go said.

Meanwhile, he also hinted that he is willing to give "sacrifice" for the betterment of the country and unite "supporters and leaders."

"Pero sa ngayon, baka hindi ko pa po panahon. Ako yung taong handing magsakripisyo para wala nang maipit, masaktan at mamroblema (Probably is not my time. I am that type of person who is ready to sacrifice himself to avoid frictions, problems, or anyone from getting hurt)," Go said.

"Having said this, I leave my fate to God and the Filipino people as I vow to do my best every day to serve selflessly and tirelessly. I am willing to make the supreme sacrifice for the good of our country, and for the sake of unity among our supporters and leaders," he said.

Go said there are still other ways he can help the Filipinos.

“Ako naman, kahit saan man ako ipadpad ng aking tadhana, patuloy po akong magseserbisyo. Kung anuman ang aking magiging desisyon, ipapasa-Diyos ko na lang ang lahat alang-alang sa kung ano ang makakabuti sa bayan (Wherever my destiny takes me, I will continue to serve the people. I will put my faith in God whatever my decision will be for the good of the country),” he said.

Go withdrew his certificate of candidacy (COC) as vice president and substituted Senator Ronald "Bato" Dela Rosa as presidential candidate on November 13, three days before the last day of substitution.

The senator is a longtime aide of President Rodrigo Duterte since the latter was mayor in Davao City.