Photos from SunStar Archive, Wikimedia Commons, and shows.acast.com
Pachico A. Seares
- A A +
DID consumers of Cebu news media know that Ruben Ecleo Jr. -- who occupied public attention from January 2002 when he killed his Cebuana wife to 2020 when he was arrested and May 2021 when he died in jail -- was believed by the group he led as "God the son" and "reincarnation of Christ"?

COMPARED TO CHRIST'S TRIAL. Had local coverage on the religious part of the story been more extensive, it would've reported that some members of the Ecleo-led Philippine Benevolent Missionaries Association (PBMA) compared his trial for parricide in Cebu City to Jesus Christ's trial, crucifixion and resurrection.

Local media would've talked about the father, Ruben Ecleo Sr., PBMA founder, and how followers viewed him as a Christ-like figure who could do anything, including resurrecting the dead. A PBMA primer says that four days after Ecleo Sr. died in 1987, he "re-appeared in the body of his son Ruben Jr."

And this: the ring and receipts of payments for entrance to their gatherings that PBMA members would need to get to heaven, underneath one of the Ecleo houses, or risk hell in the ocean deep off Surigao.

Yet PBMA insists it is not a cult, not a sect or religion. "It does not practice any form of religious worship" but apparently considers Ecleo Jr. "divine master" powerful enough to defy armed police and to call themselves "absolutely a group of God," with Ecleo Jr. as the father's "right hand in the spiritual division." And they don't address the two Ecleos as God although some members regard them as divine.

LAGIM HOST. Christine Abrigana, a Filipino-German in the United Kingdom and host of @Lagimpodcast, featured starting April 2 (season 3, episode 5) "The Sins of Ruben Ecleo Jr." Lagim, meaning "dread or terror," presents every other week crime stories from the Philippines. Abrigana, raised in Davao City and Germany, is a former family lawyer in England/Wales.

The little that got published locally about Ecleo Jr.'s religion and PBMA included: (a) its insistence that it is not a cult but "simply an association of brotherhood, non-sectarian and non-profit"; and (b) the information that his father Ruben Ecleo Sr. founded and led the group, which, Philippine National Police said, had at one time three million members in 400 chapters across the country, including Talisay City in Cebu. 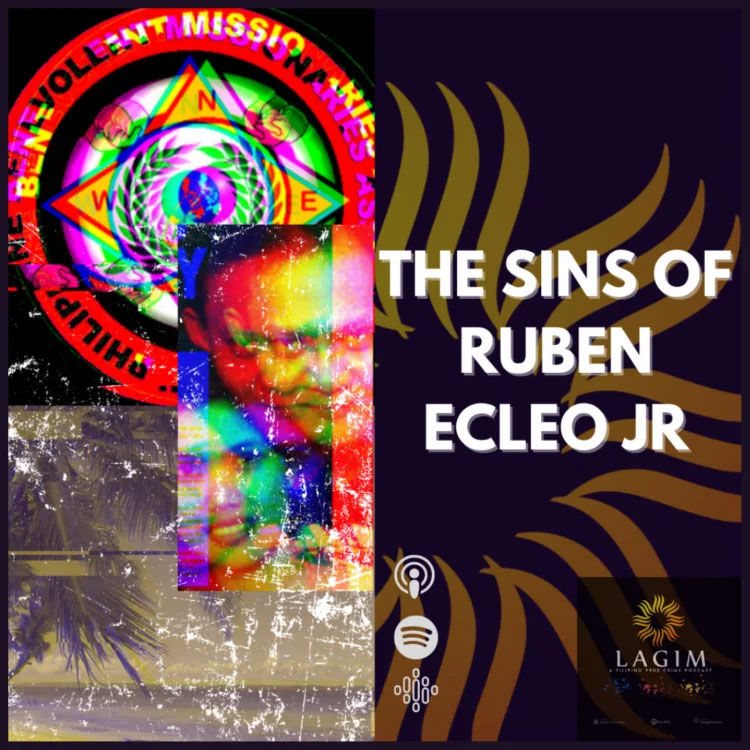 LESS ATTENTION ON RELIGION. Why the local media's less-than-deep scrutiny of Ecleo Jr.'s religious belief and his role in PBMA?

Perhaps because in his Cebu pronouncements, he didn't trumpet the claimed role of "God the son" and "reincarnation of Christ." One account said PBMAs are also not "pushy" about their religion, unlike one religious group in the country that recruits members door-to-door.

Unlike Pastor Apollo Quiboloy, whose current brush with the United States law has put him in the glare of the spotlight, Ecleo Jr. must have thought then that the posturing would put PBMA in the category of a cult, a branding the group rejects.

And the PBMA leader was the principal suspect. She was not the only victim in the body count of the running tragedy though police could only suspect, not pin the other killings, on the cult leader. The other deaths:

[1] Twenty-two people, including 16 PBMA members and one police officer, died in the June 19, 2002 police attempt to arrest Ecleo Jr. in Dinagat Islands, Surigao where he hid in his "fortress" of a mansion called White Castle, with hundreds of PBMA followers massed to protect him. He surrendered but only a few days later.

[2] A day before, on June 18, 2002, the attack by a lone gunman on the Bacolod family in Mandaue City killed Alona's parents, her brother and her sister, and a neighbor. The shooter, identified as a PBMA member, was killed by pursuing police in a shootout.

[3] The shooting to death of private prosecutor Arbeth Sta. Ana-Yongco in her office at home in Sikatuna St., Cebu City on October 11, 2004. For the murder, two PBMA members, alleged gunman Michel Favila and Nestor Carrol who drove Favila to the site, were charged.

FAILURES DEPLORED. Lagim's podcast noted the failure of police to link Ecleo Jr. to the Bacolod family massacre. The same thing could've been said on the Yongco murder. There was also no evidence Ecleo Jr. had anything to do with the death of the Bacolod family's private prosecutor.

The side issues apparently contributed to the distraction of local media from the subject of PBMA's religious belief, the most fascinating of which was Ecleo Jr. being the "son of God" who was tasked to pick who of the PBMA'ers would go to heaven or hell.

INTERESTING BITS. Lagim's podcast took up these earthly side issues:

[1] The questionable grant of bail to Ecleo Jr., which led to an eight-year stay out of jail, even after two warrants were issued for his arrest: from the Cebu RTC after he was convicted of parricide, and from Sandiganbayan, for conviction of corruption in building projects when he was town mayor. (Lagim though didn't mention the dramatic argument for the bail: the PBMA head was a "ticking time bomb.")

[2] The various dilatory tactics by Ecleo's lawyers, including moves to transfer trial, defer arraignment and question the identity of Alona's corpse dumped and found in Dalaguete.

Eyebrow-raising incidents in and out of jail included the finding of three packs of shabu when Ecleo Jr. was "processed" at the Cebu city jail, with the subsequent test allegedly confirming his use of drugs.

No mention in Lagim's episode about authorities finding a woman with him in a prison cell while three other women in an adjacent room waited for their turn. But the podcast didn't miss the bizarre use of a PBMA member owning up participation in Alona's murder, and pointing to an alleged "mastermind," her brother no less, complete with a complicit judge who convicted "the fall guy."

SERVING JUSTICE. Ecleo Jr. was convicted. Was justice served? It was not, said Lagim's Atty. Abrigana, he didn't serve the full term of his sentence.

Besides, giving him due process -- from arrest to pre-trial and main trial to the hunt for the fugitive and his second arrest and detention -- entailed huge cost in government resources.

And human lives. The "collateral" deaths took a heavy toll on families and other loved ones. Some institutions in the justice system may have been corrupted: how else could dodging the arm of the law, slowing down the trial, and delaying or evading detention have been accomplished?

With his PBMA, Ecleo Jr. and other politician members were a voting machine that helped them and national politicians get elected to public office.

We don't know if Ecleo Jr. also had the power to heal the sick and resurrect the dead, as his dad Ecleo Sr. claimed he could do. But his religious power as overlord and supreme master of PBMA also gave him political power, a heady mix that made his run afoul with the law for two decades.

View Comments
Disclaimer
SunStar website welcomes friendly debate, but comments posted on this site do not necessarily reflect the views of the SunStar management and its affiliates. SunStar reserves the right to delete, reproduce, or modify comments posted here without notice. Posts that are inappropriate will automatically be deleted.
Forum Rules
Do not use obscenity. Some words have been banned. Stick to the topic. Do not veer away from the discussion. Be coherent. Do not shout or use CAPITAL LETTERS!
Trending
Cebu
Ceres bus catches fire in Mandaue
Cebu
Cebu guv extends ban on poultry products
Cebu
Rhinos snap slump with rout of Cheetahs in Elite Basketball Cebu