THE Diocese of Bacolod, through its legal counsel Ralph Sarmiento, has filed a petition for certiorari and prohibition with application for injunction and temporary restraining order against the Commission on Elections’ (Comelec) order on the controversial “Team Buhay and Team Patay” tarpaulin posted on the wall of the San Sebastian Cathedral.

The petition, received by the Supreme Court (SC) at 8:26 a.m. Friday, assails the Comelec order directing Bishop Vicente Navarra to remove the Team Patay/Team Buhay tarpaulins posted on the San Sebastian Cathedral’s wall for being unconstitutional and void, “invoking the right to freedom of expression and the principle of separation of Church and State.” 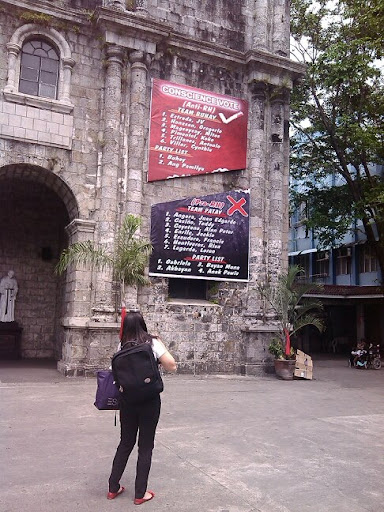 BACOLOD. The Diocese of Bacolod's Reproductive Health poster has spawned a lot of controversy that has now reached the highest court of the land. (Contributed photo)

Sarmiento said the petition also seeks to permanently restrain the Comelec and its officials from enforcing the questioned orders.

Comelec Legal Department Director IV Esmeralda Amora-Ladra, in a letter sent by fax late Wednesday to the Bacolod Comelec, asked Navarra to remove the oversized "Team Patay/Team Buhay" tarpaulin, otherwise the poll body will be constrained to file an election offense case against him.

Comelec chairman Sixto Brillantes Jr. also earlier issued a statement that the commission will file criminal charges against Church officials if they continue to refuse to take down the "oversized" tarpaulin.

But Bishop Vicente Navarra said they are not inclined to remove the tarpaulin.

Monsignor Louie Galbines said they will not remove it because it is not a political campaign material but their way of expressing opposition to the Reproductive Health law.
style="display:block; text-align:center;"
data-ad-layout="in-article"
data-ad-format="fluid"
data-ad-client="ca-pub-2836569479021745"
data-ad-slot="1977900730">