Of the 10 units, eight are big trucks that cost at least P2.1 million each, while two are medium-sized trucks worth P900,000 each.

DPS Chief Engr. Dionisio Gualisa told Sun.Star Cebu yesterday that the newly acquired dump trucks will be a huge help in their daily operations, adding it will speed up their collection of the city's garbage. 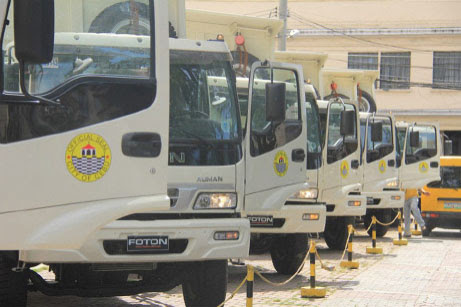 NEW FLEET. Department of Public Service Chief Engr. Dionisio Gualisa says the 10 new dump trucks will be a huge help in their daily operations, as it will speed up their collection of the city’s garbage. The dump trucks were formally turned over to DPS last Thursday afternoon in front of City Hall’s legislative building. (Contributed foto/Cebu City PIO Facebook)

Gualisa welcomed the delivery of the dump trucks, saying that some of the older dump trucks are already defective.

Early this year, DPS received several complaints from residents in different barangays because garbage in their area remained uncollected for almost a week.

Affected areas are densely populated barangays such as Capitol Site, Apas, Lahug, Guadalupe and Tejero, as well as at the Taboan and Carbon markets.

DPS' operations were hampered by the shortage of dump trucks, as some of them are no longer in running condition.

Based on their records, DPS has 21 old garbage trucks, but only 11 to 14 are in running condition.

At present, the City collects an estimated 300 tons of solid waste daily. It is dumped at a private sanitary landfill in the town of Consolacion, as the Inayawan Sanitary Landfill was shut down in December 2011.

While the newly acquired dump trucks are the property of DPS, Gualisa assured they can also be used by the barangays, especially if their own garbage trucks are no longer running.

"They can use the dump trucks. They only have to request our office," he said.

The dump trucks were formally turned over to DPS last Thursday afternoon in front of City Hall's legislative building.

When he assumed office, Mayor Michael Rama pushed for the purchase of brand new vehicles for City Hall's use, saying the vehicles and equipment bought previously were merely refurbished, which is the reason they easily broke down.
style="display:block; text-align:center;"
data-ad-layout="in-article"
data-ad-format="fluid"
data-ad-client="ca-pub-2836569479021745"
data-ad-slot="1977900730">