The rate of increase they applied for varies, but the average increase is eight percent, said Dr. Marcial Degamo, DepEd Quality Assurance and Accountability Division chief.

Degamo said the deadline for the application for tuition increase was last May 15, but applications were received as early as December last year.

There are 75 schools in Cebu Province who applied for an increase, along with 30 schools in Bohol, 10 schools in Negros Oriental, and five schools in Siquijor.

Degamo also revealed there are three schools in Cebu Province that lack a permit to operate and are being given technical assistance until they are able to meet DepEd’s standards and requirements.

In Cebu, 28 schools that will increase tuition this year are in the provincial division; three are in Bogo City; four in Lapu-Lapu; three in Mandaue City; 18 in Cebu City; 12 in Talisay City; three in Toledo City; two in Danao City; and one each in Carcar City and Naga City. 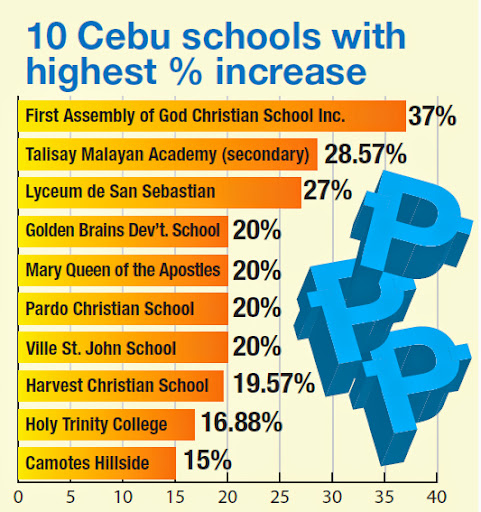 Based on the list provided by DepEd-Central Visayas, the highest tuition increase in terms of percentage was applied for by St. Andrews School in Amlan town, Negros Oriental province, at 40 percent.

Second on the list is the First Assembly of God Christian School Inc. in Barangay Cansojong in Talisay City, at 37 percent.

The lowest tuition increase applied for are between 0.10 percent and 0.20 percent, which were submitted by East Visayan Academy and Temple Christian School in Talisay City and Sienna School of Naga in Naga City.

Degamo said there are some schools with a high percentage increase because these schools may not have increased tuition in the last five years.

“The increase is needed for private schools to be at the same level as public schools, to maintain the quality of learning and improve their academic performance,” he added.

He said the schools want to attract more enrollees so they have to improve their academic performance, while some will use the increase to raise the teachers’ pay.

Competition is stiff, he said, with DepEd hiring more than 5,000 teachers for this school year.

The increase must also be used to improve facilities and upgrade equipment.

Based on the same list, the same schools also applied for an increase in fees other than tuition, and these can go up to a 56-percent adjustment.

Cordova Catholic Cooperative in Cordova town, Cebu did not apply for a tuition increase, but proposed to raise its miscellaneous fees by 13 percent.

Degamo disclosed that applications for increase were received by his office as well as notices from some schools that had to close because of low enrollment, no return of investment and the loss of their teachers.

“Last year, there were two schools. This year, only one (closed),” Degamo said.

However, three schools in Cebu Province lack a permit to operate. Two of these schools are in Lapu-Lapu City and one is located in Cebu City.

Degamo declined to give the names of the schools for security reasons.

“They are being given technical assistance. We are also giving them time to improve (their facilities and academic performance) and to submit the requirements,” he said.

With a few days left before public schools open classes on Monday, DepEd has set up public assistance desks to help facilitate enrollment.

An information and action center to accommodate complaints and inquiries is at the DepEd-Central Visayas office in Barangay Sudlon, Cebu City, as well as school division offices where these desks are manned by superintendents.

“The usual problem we encounter is the transfer of students from private schools to public schools,” said Ida Cabantan, officer-in-charge of DepEd 7’s administrative division.

She said school records and transcripts are not usually released because of non-payment of tuition or other fees.

Several reminders were also issued by DepEd-Central Visayas Regional Director Dr. Carmelita Dulangon amid the preparations of teachers and parents for school opening.

“There should be no collection of contribution,” she said, adding that such incidents should be reported to the education department.

“For those enrolling in private schools, you should check if the schools have a permit to operate,” said Dulangon.

The permit is issued so DepEd can check the curriculum that is used by private schools. She said there is a temporary permit that can be issued and that permits should be renewed regularly.

The Public Assistance Station is being implemented as part of the Oplan Balik Eskwela to ensure the smooth opening of classes, said Dulangon in a memorandum issued this month.

The primary aim of the program is to “address the problems commonly encountered during this period to ensure that pupils/students are properly enrolled and able to attend school by the first day of classes on June 3, 2013.”

All schools division and city superintendents were directed to open a help desk that would be manned by a senior staff member, equipped with hotlines to receive calls, text messages, fax messages and emails of complaints, requests and suggestions from parents and concerned citizens. (Sun.Star Cebu)
style="display:block; text-align:center;"
data-ad-layout="in-article"
data-ad-format="fluid"
data-ad-client="ca-pub-2836569479021745"
data-ad-slot="1977900730">