Support for HAU strike doubles up

ANGELES CITY -- Members of the Holy Angel University Teachers and Employees Union (Hauteu) said that support for their ongoing labor strike has doubled, even as the group plans to hold a bigger rally in front of Holy Angel University (HAU) at 4 p.m. Monday to call on the school administration to give in to the demands of its employees.

The Hauteu also said that HAU is still unbending toward the demands of the protesters.

Members of the Hauteu, along with parents, student sympathizers and concerned citizens all over Angeles City continue to hold pickets and rallies in front of HAU over the weekend in an apparent support for the protesters.

HAU, however, claimed that “all is well” inside the school. 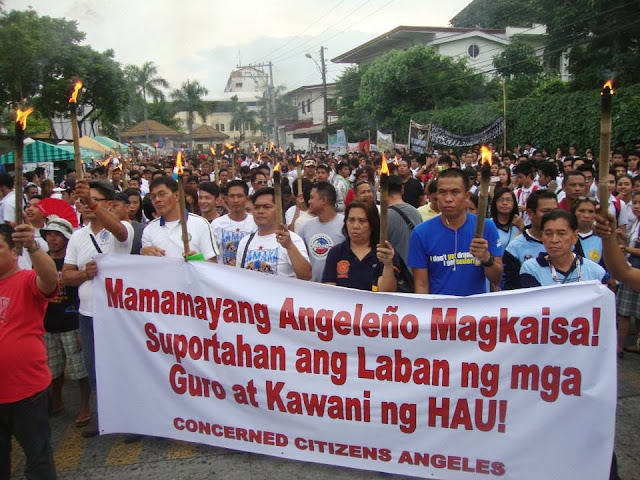 PAMPANGA. Hauteu members, parents, teachers and concerned citizens hold pickets in front of Holy Angel University over the weekend. (Contributed photo)
In a statement on its Facebook page, HAU commended “the sound discretion and intellectual maturity of its students in deciding to diligently attend classes despite repeated attempts of some quarters to bring them out of the classrooms to support a cause that is not their own. The rate of student attendance in all levels -- elementary, high school, college and graduate school -- remains normal, proving that our students have chosen to focus on their studies, and to leave the labor dispute between union and management.”

“The teachers who have been designated as substitutes administered the midterm exams early this month and gave temporary midterm grades pending the striking teachers’ submission of prelim grades and records. Meanwhile, the university appeals to the remaining faculty members on strike who have not submitted their prelim grades and the midterm period scores on various course requirements, to do so within the next few days so that the students’ permanent midterm grades can now be computed and released,” HAU added.

But some parents were quick to lash on the statement.

“I don't understand how you can say that everything is normal. There is nothing normal with the way my son's classes are going from whole day to half day. They study the same topic every day. And during their recent mid-quarter exams, almost all had perfect scores! And half of my son's section is not attending their classes anymore. You call that normal? I'm not letting my son go back to school until everything's resolved. Parents won't be paying tuition fees as well,” said Nicole Aguilar Pare, a parent.

The issue started last year when Hauteu members asked HAU for a re-computation of the incremental proceeds of 70 percent of the tuition increase HAU collected.

The negotiations have reached a deadlock after HAU management refused to account for and disclose the amount of money it has collected from tuition increases, a large chunk of which is due to workers, according to Hauteu president Edmond Maniago.

HAU’s chair of the management panel, Edna Marriza Santos, was earlier quoted by the national press stating that management cannot accept the proposal “for the end-of-year re-computation of figures with regard to the amount of incremental proceeds from tuition increase and the distribution of the 70 percent of proceeds to our employees’ salaries and benefits.”