Revilla, in his privilege speech on Monday, denied involvement in the P10-billion pork barrel scam masterminded by Janet Lim-Napoles, and implied that the President meddled with his decision regarding the impeachment of then Chief Justice Renato Corona.

Corona was put on trial for his failure to disclose to the public his statement of assets, liabilities, and net worth. Senators who voted him guilty were said to have been “bribed” to do so.

But Communications Secretary Herminio Coloma Jr. said in a Palace briefing Monday that although Revilla was “privileged” to give a speech, he was diverting from the real issue involved in the PDAF scam.

“The main issue here is the proper use of public funds for which Senator Revilla is accountable,” Coloma said, after consulting President Aquino.

“It is his duty to start explaining to our people how his PDAF allocation was actually spent,” he added.

Revilla, in his privilege speech, said Aquino met him at the President’s official residence, Bahay ng Pangarap, only to convince him to secure a guilty vote for the former Chief Justice. [Read the related story.] 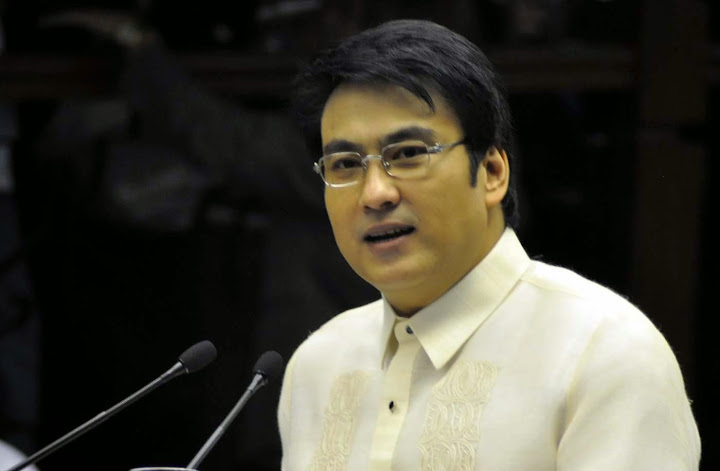 MANILA. Senator Ramon "Bong" Revilla Jr. on Monday said President Benigno Aquino III personally asked him to convict former Chief Justice Renato Corona during the latter's impeachment trial. (Al Padilla/Sunnex)
But Coloma clarified that the President met Revilla to verify persistent reports that the senators were being pressured by interest groups to influence the outcome of the impeachment trial.

He said Aquino merely asked Revilla to decide the case on the basis of its merits.

Coloma said the President also “deplored the unfair insinuation” made by Revilla against his sister, Ma. Elena-Aquino-Cruz, and her husband Eldon, despite the fact that the Czech ambassador has clearly stated that they were not in any way involved in the MRT project in which a Czech firm was interested.

He said whatever content the President and Revilla discussed was not done “in a vacuum but in a context of political events or dynamics.”

For Local Government Secretary Mar Roxas, who was tagged by Revilla as “Boy Pick-up,” Aquino’s meeting with Revilla was normal for the Chief Executive, stressing there was nothing wrong with it.

He said the discussion was also about the cityhood of Bacoor and Revilla’s being the president of Lakas Party.

Revilla said Monday that Roxas picked him up and drove him from Cubao in Quezon City to Aquino's residence at Bahay Pangarap, where he personally took some pictures as evidence.

But according to Roxas, he drove Revilla to Bahay Pangarap after they found out that the Chief Executive was not in Malacañang at that time.

To avoid any inconveniences on the part of Revilla, Roxas said he drove his vehicle.

The Department of Interior and Local Government chief also denied removing the official plate of his vehicle, stressing that he is not really using official plate, as he uses the regular plate issued by the Land Transportation Office.

“Those who know me well know that, even the Number 8 for the congressmen when I was a congressman or the No. 7 for senators and 6 for Cabinet secretaries, it’s not my practice to use them in my vehicle,” he said.

Roxas, instead, urged Revilla to just answer the plunder case slapped against him before the Office of the Ombudsman in connection with his use of his PDAF.

“I understand why Senator Revilla is angry. He is in a difficult situation with the witnesses and COA (Commission on Audit) documents linking him with the Napoles scam,” said Roxas.

“But the resolution to his problem is not circumventing the issue, the twisting of facts and deceiving people. He should just answer what the witnesses alleged against him and explain the documents linking him to the Napoles scam,” added Roxas.

Justice Secretary Leila de Lima also took the cudgels for the whistleblowers who implicated Senator Revilla and other senators in the alleged pork barrel scam.

"They exposed these wrongdoings. We will not know them if not for the whistleblowers," she said Monday following Revilla's accusation that main whistleblower Benhur Luy, whom he referred to as "Boy Pirma," forged his signatures on documents related to the use of his PDAF.

De Lima also found insulting Revilla's mockery of the truckload of evidence submitted by the National Bureau of Investigation (NBI) before the Office of the Ombudsman against him and other respondents in the plunder complaints.

Revilla presented a toy truck loaded with piles of paper during his speech. (PNA/Virgil Lopez/Sunnex)