The Pagasa said Basyang was packing maximum winds of 55 kilometers per hour (kph) near the center as of 10 p.m. Thursday. It was forecast to move west at 30 kph.

Residents living in low-lying and mountainous areas under signal number 1 were alerted against possible flashfloods and landslides, as Basyang is expected to make landfall over Surigao provinces late Friday evening or early Saturday morning, Pagasa said.

Satellite Image of Tropical Depression Basyang as of 11:32 p.m.,30 January 2014 (Source: http://www.pagasa.dost.gov.ph/)
With this, Cebu City Acting Mayor Edgardo Labella directed the City Local Disaster Risk Reduction and Management Council (LDRRMC) to be on full alert, as Basyang is also expected to bring heavy rains to Cebu once it makes a landfall in Surigao.

Since there will be downpour, Labella said flooding, particularly in flood-prone areas of the city, are expected. Barangays identified as flood-prone are Kasambagan, Kinasang-an, Labangon, Mabolo and Bonbon.

Labella also warned the residents in the 16 coastal barangays of the city against flooding, since the tide is high on Friday night. High tide is expected to reach 1.83 meters, the Pagasa said.

Aside from flooding, Labella warned residents in landslide-prone areas to be vigilant as the rains may cause soil movements. 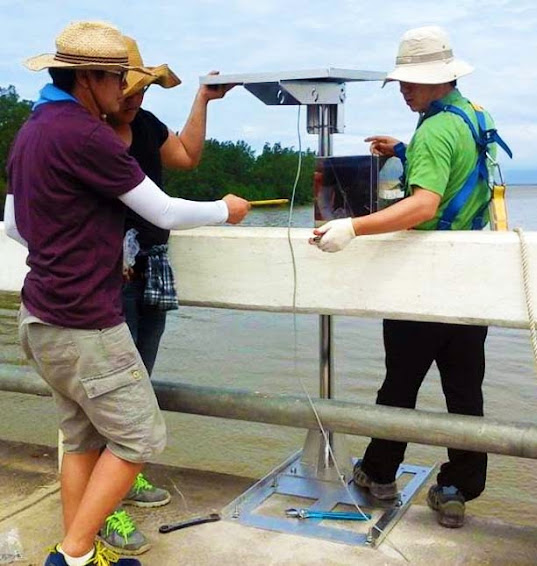 The sensor that is helpful in detecting the water level of Cagayan de Oro river was mounted at Punto-Kauswagan bridge on January 26, 2014 by a technical team from the National Disaster Management Institute of Korea. (Photo by Cagayan de Oro DRRMO)

Andrew Bascon, who heads the rescue team of Misamis Oriental, told Sun.Star Cagayan de Oro that the rescue team is stationed in Gingoog City beginning Thursday evening since the province’s flood and landslide prone areas proliferate in the municipalities of Balingasag to Gingoog.

As the rain starts, the CDRRMC has placed ready mechanisms to check the water levels in rivers in the city to warn residents.

Porcadilla assured the Automatic Flashflood Alarm System of the CDRRMC is functioning well.

Pagasa said the tropical depression, which is expected to be outside PAR by Sunday evening, will bring five to 15 millimeters of rain per hour within its 300 kilometers diameter. (LMY/Sunnex/Sun.Star Cebu/Sun.Star Cagayan de Oro)