MANILA — A Hague-based tribunal has asked China to defend its territorial claims in the West Philippine Sea (South China Sea) by submitting evidence within six months despite Beijing's refusal to respond to a Philippine legal challenge to Beijing's vast claims to the strategic waters.

The Hague-based tribunal issued a statement Tuesday giving China until December 15, 2014 to submit written arguments and evidence against the Philippine complaint, which questioned the validity of China's so-called "nine-dash" claim. That refers to a rough Chinese demarcation on its official maps of its territorial claims that cover virtually the entire West Philippine Sea.

Aside from China and the Philippines, Brunei, Malaysia, Vietnam, and Taiwan have overlapping claims across the vast West Philippine Sea, with Beijing saying it has sovereignty over virtually all of the resource-rich waters since ancient times. China's separate disputes with the Philippines and Vietnam have worsened recently, especially after it deployed an oil rig early last month in waters also claimed by Hanoi, sparking violent anti-China protests in Vietnam.

There have been fears the territorial conflicts in the region, including a dispute between Japan and China in the East China Sea, could spark Asia's next armed conflict, although analysts say a major fight is unlikely given fears that any major instability that could shatter bullish economies in the region. 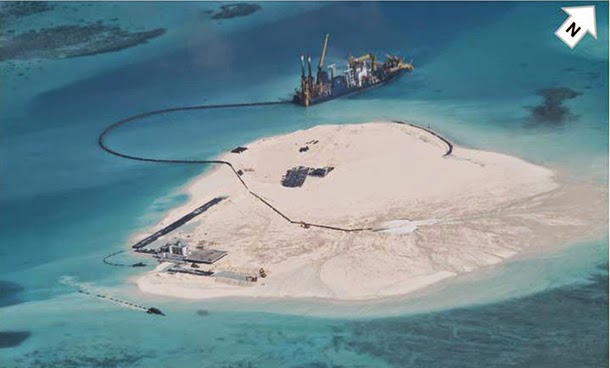 In this Feb. 25, 2014 file photo taken by surveillance planes and released Thursday, May 15, 2014 by the Philippine Department of Foreign Affairs, a Chinese vessel, top center, is used to expand structures and land on the Johnson Reef, called Mabini by the Philippines and Chigua by China, at the Spratly Islands at South China Sea, Philippines. China’s moves to assert its territorial claims in the South China Sea are giving fresh impetus to a Japanese push to play a bigger role in regional security, adding to the growing strains between the two Asian rivals. (AP Photo/Philippine Department of Foreign Affairs)
After filing a complaint early last year, the Philippines submitted written arguments and evidence against China's claims on March 30.

The five-man tribunal asked China to respond, but said the Chinese government sent a notice last month reiterating that "it does not accept the arbitration initiated by the Philippines" and that the notice it sent "shall not be regarded as China's acceptance of or participation in the proceedings."

The tribunal suggested it would continue hearing the Philippine complaint even without China's involvement.

"The arbitral tribunal will determine the further course of the proceedings, including the need for, and scheduling of any other written submissions and hearings, at an appropriate later stage, after seeking the views of the parties," it said.

Amid a dangerous standoff between Chinese and Vietnamese ships sparked by China's oil rig deployment, Vietnamese Prime Minister Nguyen Tan Dung said last month for the first time that his country was considering legal action against China over its sovereignty claims, a move Beijing would likely oppose. (AP)

View Comments
Disclaimer
SunStar website welcomes friendly debate, but comments posted on this site do not necessarily reflect the views of the SunStar management and its affiliates. SunStar reserves the right to delete, reproduce, or modify comments posted here without notice. Posts that are inappropriate will automatically be deleted.
Forum Rules
Do not use obscenity. Some words have been banned. Stick to the topic. Do not veer away from the discussion. Be coherent. Do not shout or use CAPITAL LETTERS!
Trending
Bacolod
Mayor’s son, 2 others nabbed in San Carlos City buy-bust
Bacolod
‘PinasLakas’ booster vaccination campaign launched in Bacolod City
Bacolod
Zumba instructor shot dead in broad daylight
Bacolod
Western Visayas top cop orders station commanders to ensure orderly opening of classes
Bacolod
Negros Occidental health workers 'must be trained' against monkeypox