ONE hundred fishermen from Iloilo villages received Friday their new fishing boats from the Filipino-Chinese community led by the Federation of Filipino-Chinese Chambers of Commerce and Industry Inc. (FFCCCII) Foundation Inc.

The beneficiaries from the Barangays Gogo, Botongon, Daan Banwa and Tanza in Estancia, Iloilo were also given an amount of P2,700 for labor expenses. 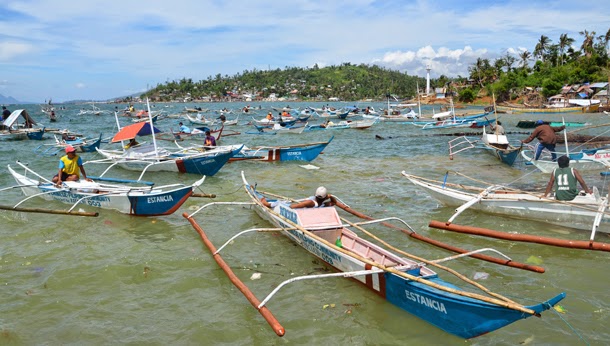 ILOILO. The newly-finished fishing boats donated by the Filipino-Chinese community to 100 fishermen in barangays Gogo, Botongon, Daan Banwa and Tanza in Estancia, Iloilo. (Contributed photo)
The Filipino-Chinese community led by Mr. Ramon Cua-Locsin provided the materials such as plywoods, epoxy, and engines for the construction of the fishing boats.

Governor Arthur Defensor Sr. thanked the Filipino-Chinese community for their numerous help to the people of northern Iloilo who were greatly affected by Typhoon Yolanda (Haiyan).

He called on the fishermen to take good care of their fishing boats and use it for their livelihood.

ILOILO. The beneficiaries of the 100 fishing boats donated by the Filipino-Chinese community strike a pose with Gov. Arthur Defensor, Mr. Ramon Cua-Locsin (5th & 4th from right, respectively) and other officials and the donors after the simple turn-over ceremony at the Estancia Fishing Port on Friday, June 13, 2014. (Contributed photo)
Emar Acosta, representing the fishermen, thanked the Filipino-Chinese community and vowed to make good use of the fishing boats.

Estancia Mayor Rene Cordero thanked Locsin and his group for their help to their town.