CAGAYAN DE ORO (Updated) - After less than 48 hours of search and rescue operation, rescuers found the remains of the adventure tourist who figured in a white water rafting accident last Friday.

Using poles with hooks and bare hands, the guides first removed driftwood and other debris trapped underneath the boulder, which rafters call an undercut, formed when fast moving water slams into a big rock, creating a deep pool with strong current.

Kagay’s Roldan Kaamiño said Balbin had gotten snagged in the undercut together with other debris.

Balbin's body was immediately transported to a funeral parlor in the city using the vehicle of the Cagayan de Oro Disaster Risk Reduction Management Council (CDRRMC). CAGAYAN DE ORO. River guides of Kagay Journey-White Water Rafting and Kayaking search for a guest who had gone missing Friday, June 13, after the raft she was on with four others capsized. This photo was taken on June 14, 2014. (Photo by JB R. Deveza)
Michael Dominic Paredes, Balbin's cousin-in-law, said they were in sitio Cabula in Barangay Lumbia around 11:30 a.m. when the rescuers called them that Balbin's body was found.

“The moment we left the site, they [rescuers] found her. Even before the food was served, we immediately left and rushed back to the area," Paredes told Sun.Star Cagayan de Oro Sunday.

Balbin's cousin Marjorie Balbin-Paredes said she was somehow at peace the moment the body was retrieved.

“Devastated by how she died, but at the same time, relieved that her body was found,” she said.

She added Aizza Mae will be cremated following an autopsy before bringing her back to her hometown in Loboc, Bohol.

The Cagayan de Oro City Government is underwriting all expenses pertaining to the processing and transport of Balbin’s remains.

Kagay, on the other hand, has also been helping out in providing for the other needs of family members who have come to bring Aizza Mae home.

Kagay owners Chisum Factura, Rolly John Barretto, and Kaamiño have also said they will accompany the family to Loboc to personally offer their condolences.

Earl Balbin, one of the victim's cousin based in the city, still couldn’t believe what had happened.

The victims’ camp has not talked to Kagay yet regarding the arrangement as of this posting Sunday.

Asked if their camp is mulling on filing a case against Kagay, Patrick Agus, one of Aizza Mae’s companions on the raft that flipped, said, “I don’t know yet.”

It is also up to Balbin’s family if they will file legal action against the rafting company, Agus added. 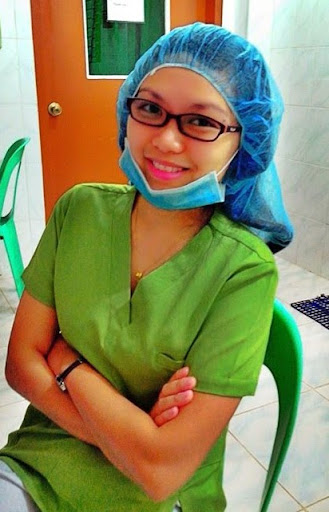 Aizza Mae Calipusan Balbin worked as a home-based nurse for a US-based firm that provides nursing care in the US. (Photo taken from Balbin's Facebook page)
No premonition

During the course of their adventure, Agus, one of four who was on the rubber raft that overturned, said they were "comfortable and excited" with how the rapids went as they neared the end of the rafting course until they capsized.

Agus said their rafting guide was able to help him and his two other companions after the three of them surfaced, but not Balbin.

However, he belied earlier reports that said Kagay was able to conduct first aid after they surfaced.

“Her mother and our relatives wish to remember her as she was,” Balbin-Paredes said. “She was a happy person, always smiling, always ready to give anyone a hand.

Aizza Mae was born on November 27, 1987 to George Balbin, a former music teacher, and Ruth Balbin, an employee at the Loboc treasurers’ office.

Aizza Mae obtained a nursing degree from Holy Name University in Tagbilaran, Bohol in 2008 and has been working as a home-based nurse for a US-based firm that provides nursing care in the US.

Along with a younger brother who works in the Middle East, Aizza Mae had wanted to work abroad but opted to stay home in Loboc to help care for her ailing father who has been bed-ridden following a vehicular accident in 2005.

“It was her dream to work in Australia but she wanted to be near her family and look after her father,” Balbin-Paredes said.

Musically-inclined like her father, Aizza Mae used to be part of the world-famous Loboc Children’s Choir and was part of the choir when it participated in a music festival in Tianjin, China in 2000 and in other parts of Asia. (Sun.Star Cagayan de Oro)