MANILA (Updated) -- The Philippines wants an international tribunal to issue a decision as quickly as it can on a Manila complaint that questions the legality of China's massive territorial claims in the West Philippine Sea because the disputes continue to escalate.

Foreign Affairs Secretary Albert del Rosario said late Tuesday that the Philippines would ask its lawyers to petition the Arbitral Tribunal in the Hague, the Netherlands, to issue an earlier ruling after China said it would not get involved in the case, which should shorten the arbitration proceedings.

"I am hoping we could get something by next year ... because China is not participating and because the situation is getting worse every day in the South China Sea (West Philippine Sea)," del Rosario told reporters.

After China took effective control of a disputed shoal, the Philippines early last year started the tribunal process that questioned the validity under international law of China's so-called "nine-dash line" claim, a rough demarcation of its territory on its official maps that virtually envelopes most of the West Philippine Sea.

Philippine officials have said it may take three to four years for the tribunal to issue a decision. 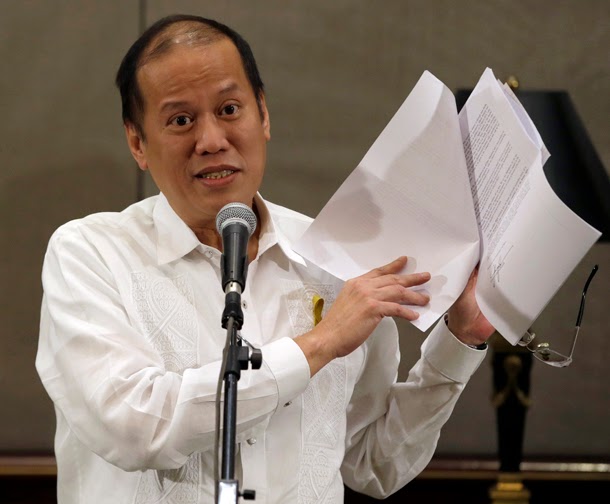 Philippine President Benigno Aquino III holds documents as he talks on various issues, including the disputed reefs on the South China Sea, following his address to delegates at the ASEM (Asia Europe Meeting) Conference on Disaster Risk Reduction and Management, Thursday, June 5, 2014 in Manila, Philippines. A Hague-based tribunal has asked China to defend its territorial claims in the South China Sea by submitting evidence within six months despite Beijing's refusal to respond to a Philippine complaint questioning the legality of Beijing's vast claims to the strategic waters. (AP Photo)
Even with the pending legal challenge, China has continued to expand and fortify its claims, including reclaiming land in disputed reefs that can be turned into offshore military bases, possibly with airstrips, del Rosario said.

In early May China deployed an oil rig guarded by dozens of escort ships in waters also claimed by Hanoi, igniting sea confrontations and anti-China protests in Vietnam.

The tribunal issued a statement early this month giving China until December 15 to submit written arguments and evidence against the Philippine complaint, but Beijing said it would not join the arbitration proceedings.

Brunei, Malaysia and Taiwan also have had overlapping territorial claims in the West Philippine Sea which have sparked confrontations.

There have been fears the conflicts, including a dispute between Japan and China in the East China Sea, could spark an armed conflict, although analysts say a major fight is unlikely.

The Philippines recently sought a moratorium on construction and other expansion activities in the disputed areas by rival claimant countries, but China has dismissed that, insisting it has had sovereign rights over most of the disputed waters since ancient times. (AP)