MANILA -- Coca-Cola Foundation Philippines, with its longstanding partner, Ten Accomplished Youth Organizations (Tayo) Awards Foundation, is once again calling on student and youth organizations across the Philippines to take on the 12th Tayo Awards challenge. 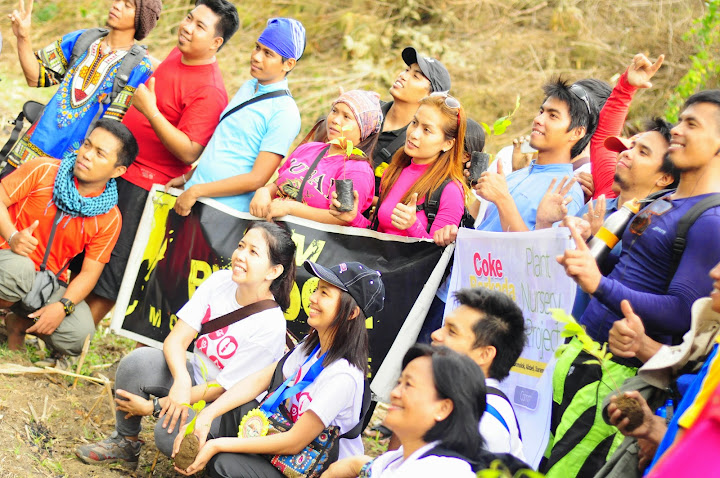 MEMBERS of Team Bundol Mountaineers, the Coke Barkada Awardee last year, with officers of the Coca-Cola Foundation Philippines Inc. smile after planting trees by the balding side of the mountain. (Contributed photo)
Special recognition was also given to a high-energy team of Sarangani mountaineers dubbed Team Bundol, this year’s Coke Barkada awardee.

The Coke Barkada Award is given to one of the Tayo finalists that best demonstrates the qualities of a Coke Barkada – a group that shares happiness and embodies the passion to change communities through projects that mirror the Coca-Cola sustainability pillars of water stewardship, women empowerment, and promotion of well-being.

“At Coca-Cola, we believe that you can never be too young to make a meaningful difference in the lives of others. People may be calling this generation the ‘selfie’ generation but, as one Tayo Finalist put it, it’s a we-generation or a Tayo-generation, not a me-generation, as I’ve come to know them. I feel like a proud mom to them, hearing their stories and getting to know all the wonderful work that they do,” said Cecile Alcantara, president of the Coca-Cola Foundation Philippines Inc.

In 2006, Coca-Cola Foundation scaled up its partnership to be the Tayo Award’s sole co-presenter.

“Last year, I remember being brought to tears when one of the Tayo Finalists went to the audience to hug her friend during the awarding ceremony. Moments like these are the result of the golden triangle at work: where business, civil society and government pool together to help towards the growth of the country and its people. As a Company, we believe that our business is only as strong and sustainable as the communities we serve and through partnerships like these, we take the opportunity to contribute all we can to make a positive impact,” said Atty. Adel Tamano, vice president for Public Affairs and Communications of Coca-Cola Philippines, who also serves a judge in the panel for Tayo.

“You don’t forget groups like the Team Bundol Mountaineers, Tulong Sa Kapwa Kapatid, or even the Cebu Youth Ambassadors from the year before. These aren’t just groups, these are real people with real stories and I look forward to being part of the panel again this year to hear all of them,” he added.

The Tayo Awards 2014 is presented by the Tayo Awards Foundation, together with the Coca-Cola Foundation Philippines, in partnership with the National Youth Commission and the Office of Senator Bam Aquino.

To join the Tayo Awards, organizations must accomplish a Tayo 12 Entry Form and Tayo 12 Project briefer that can be accessed through in the Tayo Awards Website (http://www.tayoawards.net/tayo12/).

Documents proving the existence and veracity of information, list of officers, leaders and founders and three-page project documentation must also be e-mailed to Tayo secretariat.

The Tayo Awards accepts entries from interested youth groups, organizations, clubs, and societies that are composed of at least 15 members, more than half of which must be between 15 to 30 years old. The submitted projects must have either been recently concluded or are still ongoing.

Entries are judged on the following criteria: Impact of project entry on stakeholders; harnessing the spirit of volunteerism and citizenship; creativity and innovation; and sustainability and effective use of resources. The winning organizations will receive a special trophy created by Philippine sculptor Tyom De Leon Imao, and a Php50,000 grant from Coca-Cola Foundation Philippines.

Deadline for entries is on September 30, 2014. Interested organizations may submit their entries through the official website of Tayo Awards, www.tayoawards.net. (PR)