SENATE Minority Leader Juan Ponce Enrile said he still believes in the country's justice system in spite of his imminent arrest for plunder and graft charges in connection with the pork barrel fund anomaly.

Enrile who is a lawyer himself is confident that he can prove to all his accusers that they are wrong as he vowed to give them a good fight.

"As long as I have strength in me and my faculties still serve me, I will fight for what I know is the truth to clear up doubts lingering in Filipinos minds particularly among my provincemates in Cagayan, where I was born, grew up and started to be known by the populace," he said.

He said fate led him to his present situation but maintained that he knows his law and he will not take all the accusations sitting down.

Enrile's lead counsel Estelito Mendoza argued before the Sandiganbayan third division that the senator should not be charged with plunder.

Mendoza insisted that there is no direct witness presented by the Office of the Ombudsman that the former Senate President received money representing kickbacks or commissions from the misuse of the Priority Development Assistance Fund (PDAF). 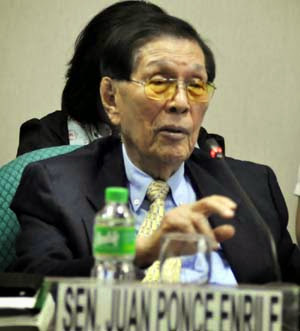 Senator Juan Ponce Enrile
The former justice secretary and solicitor general pointed out that the voluminous documents presented by the Ombudsman did not specify how the senator supposedly pocketed P172 million from his PDAF.

Another well-known lawyer Jose Flamininano explained the need for the court to nullify the plunder charges against Enrile for lack of probable cause by asking the Sandiganbayan not to proceed with the case.

Enrile said he is taking things in stride, saying the same thing happened to him in the past where he was incarcerated during the time of former President Corazon "Cory" Aquino the mother of President Benigno Simenon Aquino III and the last administration under the leadership of former President now Pampanga Representative Gloria Macapagal Arroyo.

Enrile was charged with rebellion and murder by the Cory Aquino administration by then Justice Secretary and now Senate President Franklin Drilon sometime in 1990 over a series of failed coup attempts. Enrile was arrested and jailed but won the case in court.

The same thing happened 11 years after during the time of the Arroyo administration at the height of People Power 3 in support of then ousted President Joseph Estrada.

Enrile was arrested for the charge of inciting to sedition in relation to the storming of Malacañang Palace by supporters of Estrada during the so-called Edsa People Power 3.

In both cases, Enrile said he sought a reprieve from the Supreme Court and his efforts proved to be fruitful with the dismissal of the cases.

And now that Enrile is facing impending arrest, the senator from Cagayan shrugged off the threat as he expressed his strong belief that he will win the case.

Enrile said he cannot explain why in every decade of his political life from the time he entered politics followed by the 1986 Edsa People Power Revolution until this time, he continues to face another challenge and another chapter, seemingly a part of every page in his book of life.

The senator who is now in his 90s said he believes that God has a purpose only known to Him.

Enrile said he remains convinced that justice still prevails in the country despite the negative claims of some quarters.

The senator said he does not have a grudge against any of his accusers in the plunder case, those standing as plaintiffs as well as those who pursued the filing of the charges over his purported misuse of his pork barrel funds. (Camille P. Balagtas/Sunnex)

View Comments
Disclaimer
SunStar website welcomes friendly debate, but comments posted on this site do not necessarily reflect the views of the SunStar management and its affiliates. SunStar reserves the right to delete, reproduce, or modify comments posted here without notice. Posts that are inappropriate will automatically be deleted.
Forum Rules
Do not use obscenity. Some words have been banned. Stick to the topic. Do not veer away from the discussion. Be coherent. Do not shout or use CAPITAL LETTERS!
Trending
Bacolod
Valderrama: ‘If the President says I will resign, I will immediately do so’
Bacolod
Ex-cop nabbed in buy-bust; more ‘shabu’ intended for MassKara seized
Bacolod
DepEd in Negros Occidental notes lower enrollment this school year
Bacolod
Bacolod installs solar-powered CCTVs at central market
Bacolod
2 alleged CTG members wounded in clash