MANILA (3rd Update) -- The Sandiganbayan fifth division found on Monday probable cause on the plunder and graft cases filed against Senator Jinggoy Estrada, thus ordered for his arrest in connection with the Priority Development Assistance Fund (PDAF) anomaly.

"The court finds that sufficient grounds exist for the finding of probable cause for the purpose of issuing warrants of arrest against the accused," the resolution read.

At 11:30 a.m., the Sandiganbayan signed the arrest warrant against the senator and his co-accused in the PDAF scam.

Estrada immediately surrendered to his father, former President and now Manila Mayor Joseph Estrada, in San Juan even before the warrant of arrest was issued to him, said Jose Flaminiano, the senator's lawyer.

"He [Mayor Estrada] is a person in authority," Flaminiano said. 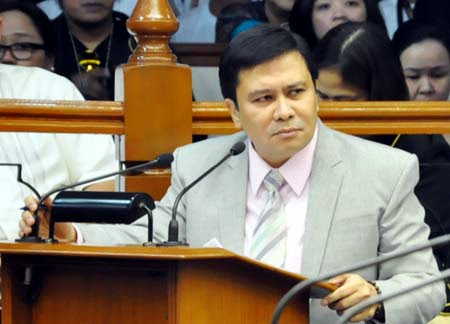 Estrada is facing plunder, a non-bailable offense, and 11 counts of graft for alleged amassing P183 million in kickbacks from 2004 to 2012 from the alleged illegal disbursement of his PDAF allocations.

"The truth will set me free," a confident Senator Estrada told reporters during his emotional visit to his father Monday.

This will be the second time the senator will be detained for a plunder case. Estrada and his father were detained in 2001 but he was later on acquitted and freed.

Another division of the Sandiganbayan has yet to resolve the motion for judicial determination of probable cause filed by Senator Juan Ponce Enrile, a co-accused in the PDAF scam. (Sunnex)