The United Kingdom's 88-year-old monarch toured the Belfast sets of the hit HBO series "Game of Thrones" and met many of its stars Tuesday beside the show's sword-covered seat of power, the Iron Throne. 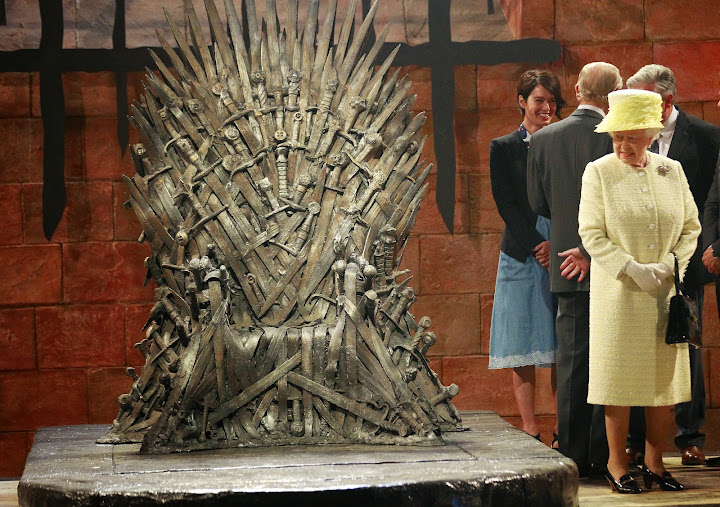 Britain's Queen Elizabeth visits the throne room at the set of the Game of Thrones TV series in Titanic Quarter, in Belfast, Northern Ireland, Tuesday, June, 24, 2014. The Queen is on a 3-day visit to Northern Ireland. (AP)
Unlike many visitors to Belfast's Titanic Studios, the monarch declined to take a seat on the throne created for the ruler of the mythical Seven Kingdoms.

"Game of Thrones" creators David Benioff and Dan Weiss escorted the monarch through the show's custom-made armory, hangars of costumes, and sprawling sets used to shoot the program's interior scenes and perilous ice-cliff ascents — part of the biggest TV production ever mounted in Europe.

View Comments
Disclaimer
SunStar website welcomes friendly debate, but comments posted on this site do not necessarily reflect the views of the SunStar management and its affiliates. SunStar reserves the right to delete, reproduce, or modify comments posted here without notice. Posts that are inappropriate will automatically be deleted.
Forum Rules
Do not use obscenity. Some words have been banned. Stick to the topic. Do not veer away from the discussion. Be coherent. Do not shout or use CAPITAL LETTERS!
Trending
Bacolod
Mayor’s son, 2 others nabbed in San Carlos City buy-bust
Bacolod
‘PinasLakas’ booster vaccination campaign launched in Bacolod City
Bacolod
Zumba instructor shot dead in broad daylight
Bacolod
Western Visayas top cop orders station commanders to ensure orderly opening of classes
Bacolod
Negros Occidental health workers 'must be trained' against monkeypox