MANILA — Thousands of Filipino students from a Roman Catholic-run school for girls joined Friday a global campaign to free more than 200 schoolgirls abducted by Islamic extremists in Nigeria, chanting "bring them back" and urging motorists in Manila to honk their car horns in solidarity.

About 4,000 grade school to college students and nuns of St. Scholastica's College spilled out of their campus to line up a busy street in Manila, many of them carrying placards that read "Bring Back Our Girls" and thumping their fists in the air as they chanted. They gave commuters a statement calling for the release of the girls and affirming their belief that girls deserve to be educated. 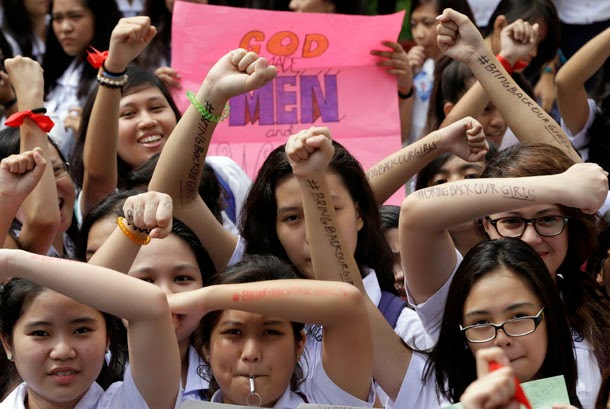 Students from St. Scholastica's College, a Catholic school in Manila, show the message on their forearms as they shout slogans and display placards during a protest outside their campus Friday, June 27, 2014 in Manila, Philippines. Thousands of Filipino students from the school joined Friday a global campaign to free more than 200 schoolgirls abducted by Islamic extremists in Nigeria, chanting "bring them back" and urging motorists in the Philippine capital to honk their car horns in solidarity. (AP Photo)
Extremists from Boko Haram — which means "Western education is sinful" — first abducted more than 200 schoolgirls in Nigeria in April. Witnesses said they took 91 more people, including toddlers as young as 3, in attacks on villages in that African country earlier this month, providing fresh evidence of the military's failure to curb an Islamic uprising and the government's inability to provide security.

The most recent victims included 60 girls and women, some of whom were married, and 31 boys, witnesses said.

Celine Saplala, a nun and official of the school, said the rally was meant to appeal to the abductors and to people all over the world to free the girls and respect "their right just like anybody else to pursue their dream for an education."

"Please bring back our girls," said senior college student Roelle Charmaine Bito. "We have the right to be educated, each and every one of us." (AP)

View Comments
Disclaimer
SunStar website welcomes friendly debate, but comments posted on this site do not necessarily reflect the views of the SunStar management and its affiliates. SunStar reserves the right to delete, reproduce, or modify comments posted here without notice. Posts that are inappropriate will automatically be deleted.
Forum Rules
Do not use obscenity. Some words have been banned. Stick to the topic. Do not veer away from the discussion. Be coherent. Do not shout or use CAPITAL LETTERS!
Trending
Bacolod
Vet notes increases in prices of egg, meat products in Negros Occidental
Bacolod
CPSU-Hinigaran inaugurates 3-storey building, covered court
Bacolod
Store worker brutally killed in Silay
Bacolod
NBI probes ‘fake’ STL operations in NegOcc
Bacolod
Labor leader lauds SSS for running after delinquent employers