MANILA (Updated, 4 p.m.) -- Senator Jose "Jinggoy" Estrada refused to enter a plea on Monday during his arraignment at the Sandiganbayan fifth division on charges of plunder and graft, prompting the court to enter a plea of "not guilty" on his behalf.

"I respectfully refuse to enter a plea, your honor… I have a pending petition at the Supreme Court. The Ombudsman committed grave abuse of discretion," Estrada told the court after the charges were read out.

The senator asked the SC last June 24 to prevent the anti-graft court from hearing his cases and invalidate the arrest warrant against him.

Meanwhile, businesswoman Janet Napoles, Estrada's co-accused, entered a not guilty plea on plunder and graft charges during her arraignment. 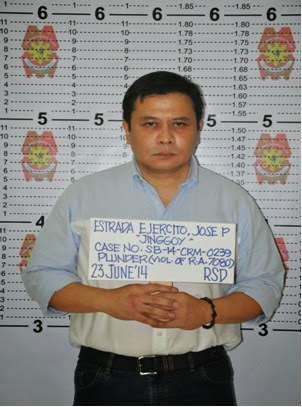 Estrada is accused of plundering P183-million from his Priority Development Assistance Fund (PDAF) allocations allegedly through the bogus non-government organizations (NGO) of Napoles.

Napoles, who is co-accused in two other separate plunder and graft charges against Senators Ramon "Bong" Revilla Jr. and Juan Ponce Enrile, entered a not guilty plea during her arraignment before the Sandiganbayan first division last week.

After the court proceedings, Estrada said the attempt of the Office of the Ombudsman to amend the information for plunder that they filed before the Sandiganbayan indicated that the cases against them "were rushed and railroaded."

"The cracks are showing... due process of the law was not observed especially during the preliminary investigation of the Ombudsman," Estrada said.

The prosecution team lead by Special Prosecutor Danilo Lopez earlier asked the court to amend the information submitted before the Sandiganbayan to emphasize that the senator was the one who amassed, accumulated, and acquired ill-gotten wealth in connivance or in conspiracy with his co-accused public officer and private individuals.

But the court warned that if Ombudsman proceeds with amending the information for plunder, Estrada might be released from jail. The original information was used as basis for the issuance of a warrant of arrest against the senator and his co-accused.

The senator warned the case against him is politically motivated.

"I have been saying all along that this is politically motivated with no other intent but to persecute the members of the opposition while protecting their allies," the lawmaker insisted.

Estrada's co-accused in the plunder charge were: Pauline Therese Mary Labayen and John Raymund de Asis. All co-accused entered a not guilty plea during their arraignment Monday before the fifth division.

Some 150 cops from the National Capital Region Police Office (NCRPO) and Special Action Force (SAF) were deployed at vicinity of the Sandiganbayan along Commonwealth and Batasan Road in Quezon City to maintain peace and order during the court proceedings.

After their court appearances, Estrada and Napoles were returned to their respective detention cells. Estrada is detained at the Philippine National Police (PNP) Custodial Center in Camp Crame together with Revilla while Napoles is being held at the Fort Sto. Domingo in Sta. Rosa, Laguna.

Meanwhile, the court has yet to resolve the bail petition filed by Estrada's camp last week.

"It's either they grant our motion for bail to set the hearing. It is the court that will set it," said Alexis Abastillas-Suarez, one of Estrada's legal counsels.