CEBU CITY (Updated) - The priest who berated a 17-year-old single mother during a baptism last Sunday apologized Tuesday, describing his behavior as unbecoming and cruel.

“I am now making a public heartfelt apology to the mother of the child and her immediately family. The words I said and the rude attitude that I showed before I performed the rite of baptism last Sunday...was indeed unbecoming,” Obach wrote.

“I deeply regret that I have done this. I only later realized how cruel my ways to educate and impart lessons for the said event.”

The congregation also apologized for Obach’s behavior, saying it was “contrary to the charism and mission for which our congregation was founded—compassion, especially to the poor and the most abandoned.” It said that Fr. Obach has been a priest for 28 years. 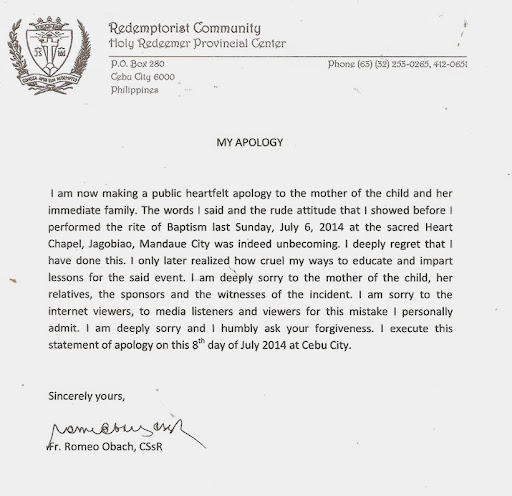 “What the priest did to her was verbal abuse,” said Social Welfare Officer Jenneth Robles-Aquino. “There is a need to let go of her negative feelings against the priest for it might affect her.”

Aquino said they will also try to talk with Fr. Obach and let the priest explain his side. She suggested to the girl’s family not to take any legal action right away.

The incident caught the public’s eye after the girl’s mother uploaded a video clip of the incident on her Facebook page. It had been shared nearly 39,000 times as of 9 last night.

In his letter, Fr. Obach said: “I am deeply sorry to the mother of the child, her relatives, the sponsors and the witnesses of the incident. I am sorry to the Internet viewers, to the media listeners and viewers for the mistake I personally admit. I am deeply sorry and I humbly ask your forgiveness.”

The C.Ss.R has decided to keep him from saying mass, until an internal investigation ordered by his superior is completed. “Appropriate sanctions will be applied once the investigation is complete so that justice may prevail,” the congregation said.

“He (Fr. Obach) has been asked to take more time for prayer and reflection,” said Suico.

Kaye said she is still haunted every night by the priest’s words and would like him to ask for an apology from her in person.

“Bag-o pa kaayo nahitabo ang tanan. Grabe kaayo ang iyang gipangsulti (It is all still so new and the effects of what he told me have not worn off),” she said. “Dili pa siya angay mapasaylo (I cannot forgive him yet).”

Her mother obtained a copy of Obach’s apology after she went to the Redemptorist Church with her friends Tuesday afternoon.

Carlota (real name withheld) said she was no longer angry with the priest, but requested Fr. Obach to meet with them personally to settle their differences.

“Makapasaylo ta kay tawo ra man. Wala mausab akong pagtan-aw niya, pari gihapon siya (We can forgive. We are all human. I still view him as a priest),” she said.

Obach, who hails from Iligan City, failed to show up during the short press conference at the Redemptorist Church in Cebu City Tuesday. His congregation spoke for him.

“The Redemptorist Community has always upheld the rights of the poor and disenfranchised since the first missionaries arrived here in Cebu in 1906. And this has been our conviction through the decades,” the C.Ss.R statement read.

Suico said they will welcome any complaint that Kaye’s family would file against Obach.

“It is but unfortunate that the incident involving Fr. Obach occurred, as he has been a good missionary for many years. He has served in many capacities and various places heeding the challenges of the congregation, yet he is also human and prone to lapse of judgment and imprudence,” the congregation’s statement read.

They said they “do not condone” what happened.

“We sincerely feel for the family and to them we extend our heartfelt apology,” the letter read. “We respect their situation at the moment and sympathize with their hurt and anger over this matter.”

The congregation said they will reach out to the mother’s family at the appropriate time. They also appealed for calm and sobriety from the public.

Dilaab Foundation Executive Director Fr. Carmelo Diola advised Fr. Obach to apologize “not only to her (the mother) but to the whole church of Cebu.”

Diola said the priest should follow Pope Francis, who baptized the baby of an unwed couple last January and called priests who refuse to baptize an illegitimate child as hypocrites.

A worker in the Redemptorist Church said that Fr. Obach was hurting after the baptism video went viral on social media, radio dyLA reported.

“As a general rule, we first give the Redemptorist community our trust and confidence. If there are some who are not contented with the results of the case, then it’s that time that we will conduct our own investigation,” the archbishop said in a press conference Tuesday.

Meanwhile, a police officer said that the priest may be made to face criminal charges for what happened.

Policies for disciplining priests do not differ, whether they are diocesan priests or belong to a religious order.

Palma said that Fr. Obach should have been compassionate with the 17-year-old unwed mother.

“We all agree that everyone needs education. This is an imperfect world and there are a lot of imperfections in our life. We need education that will allow us to live according to the ideals and precepts of the Gospels. But it also reminds us to be compassionate, especially toward those in the periphery and those who are unmarried,” Palma said.

Palma added that what Obach did was contrary to the message of Pope Francis and the Catholic Bishops Conference of the Philippines to observe mercy.

“Let us be a people of compassion without the need to impose catechesis,” he added.

Under Republic Act 7610 or the Special Protection of Children Against Abuse, Exploitation and Discrimination Act, any act that “debases, degrades or demeans” the dignity of a child may be considered child abuse.

Unjust vexation, on the other hand, is penalized under Article 287 of the Revised Penal Code.

Cuizon said she already directed the Basak Police Station in Mandaue to investigate and to assist the mother in case she and her family need help from the police.

Sacred Heart Chapel pastoral staff Adelfa Policarpio said it was the first time she heard Fr. Obach scolding a single mother. She said that the priest was not angry when he baptized some babies of unwed parents last June 28.

Policarpio, 59, said that Fr. Obach is a disciplinarian who always points out that parents should not let their children loose during mass.